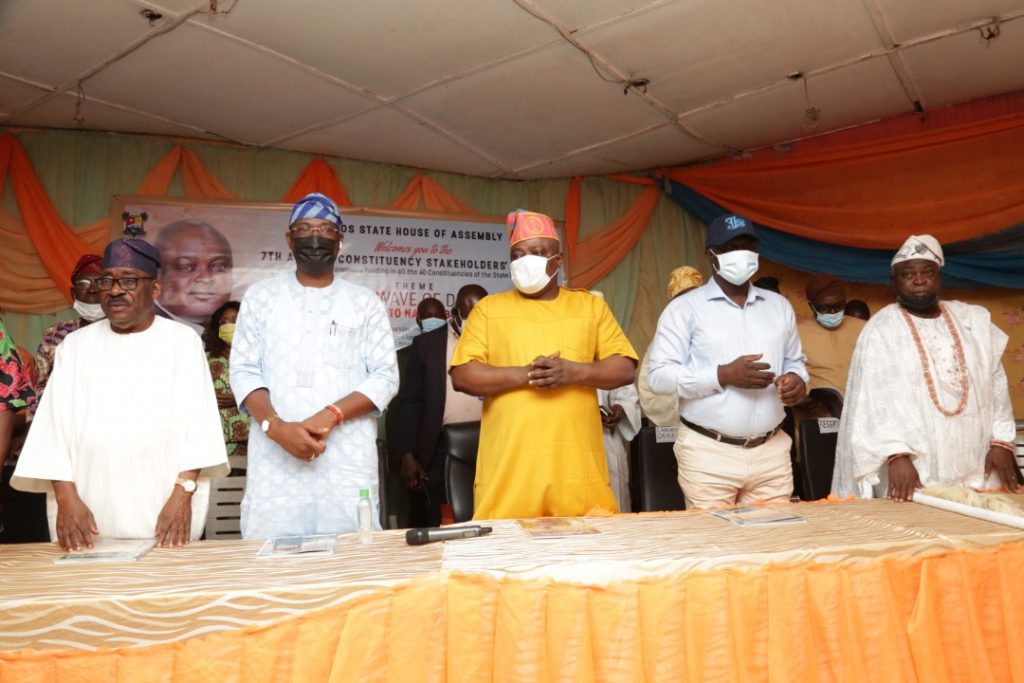 … Speaker says Lagos Assembly passing vital laws against drug abuse
… Egunjobi pleads for more efforts in fight against substance abuse
The Speaker of the Lagos State House of Assembly, Rt. Hon. Mudashiru Obasa, on Thursday decried the increasing rate of drug abuse among youths and even parents in Nigeria.
The Speaker, who spoke at the 7th Annual Constituency Stakeholders’ Meeting in his Agege Constituency 1, warned that this menace must be urgently checked to prevent its devastating effects on the growth and progress of the country.
According to Obasa, the Lagos State House of Assembly has been at the forefront of the fight against drug abuse through various legislations. 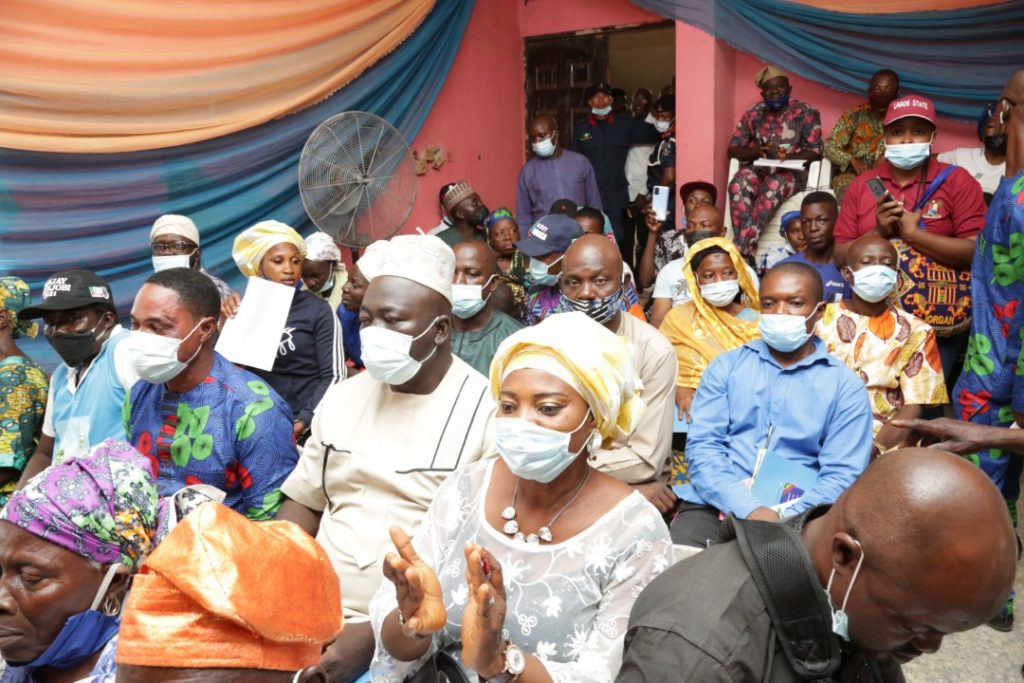 “At the Lagos State House of Assembly, the leadership and members of the House have always taken matters affecting residents and especially the youths very passionately.
“The House has continued to be proactive in the consideration of viable laws and policies that would enhance youth potentials and development.
“Some of the recent laws that are passed attest to government’s efforts on this matter and these include the law to amend the Lagos State Sports Commission law of 2015 to promote youth and sports development in Lagos and for connected purposes.
“The law will ensure that youths are provided with great opportunities not only in the area of recreation but where they can nurture, explore and utilise their potentials in sporting activities to become professional sportsmen and women.
“This would also take the minds of many of them off drug abuse and criminal activities,” the Speaker said.
Obasa listed other youth-oriented bills considered by the House to include two recent ones for the establishment of a university of education and another for the establishment of a university of science and technology, which aims to address the inadequacies in polytechnic education system in Nigeria.
“While the passage of the Lagos Neighbourhood Safety Corps is aimed at ensuring the safety of all in our neighbourhood, the prevalence of drug abuse amongst adults and youths, if not effectively addressed and curbed, will jeopardise the entire efforts of the House in the establishment of a safe, peaceful, and livable society. 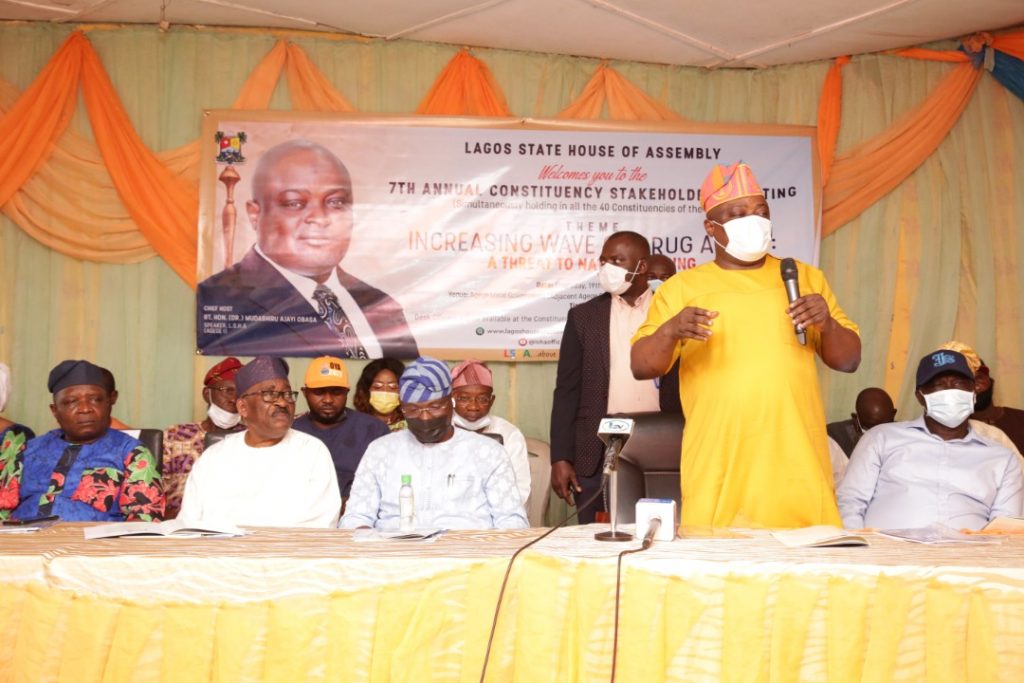 “Consequently, we call on all stakeholders, residents, parents, teachers, students, school proprietors, religious organisations, celebrities, social media influencers, professional bodies, the academia, civil society organisations and community leaders to work in concert with the government for the common good of our society by saying ‘no to drug abuse trafficking’,” he said.
In his address at the event, the chairman of Agege Local Government Area, Alhaji Ganiyu Egunjobi, lamented that drug abuse had become so alarming that Buba Marwa, chairman of the National Drug Law Enforcement Agency (NDLEA), recommended tests for public office holders, intending couples and admission seekers.
“If we continue in this manner and fail to salvage the situation, in no distant future, there would be an increase in the population of persons with drug abuse-induced health problems,” he warned.
Guests, who spoke at the event, commended the Speaker for the various projects he had attracted to the constituency. They also emphasised the need to effectively curb drug abuse with the clergy promising to carry the campaign to worship centres. 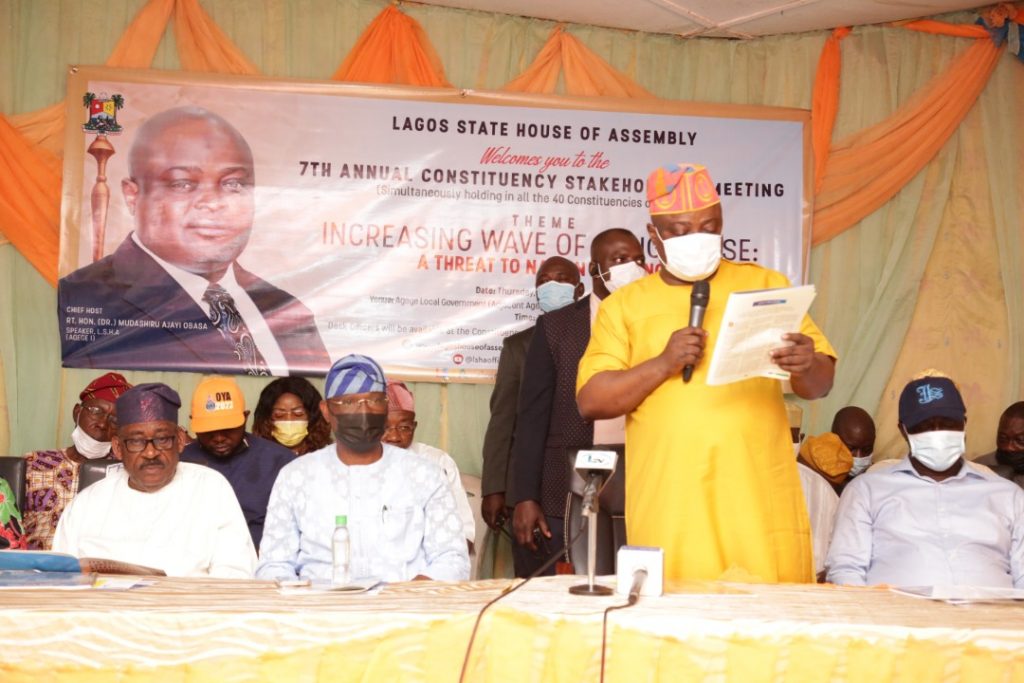