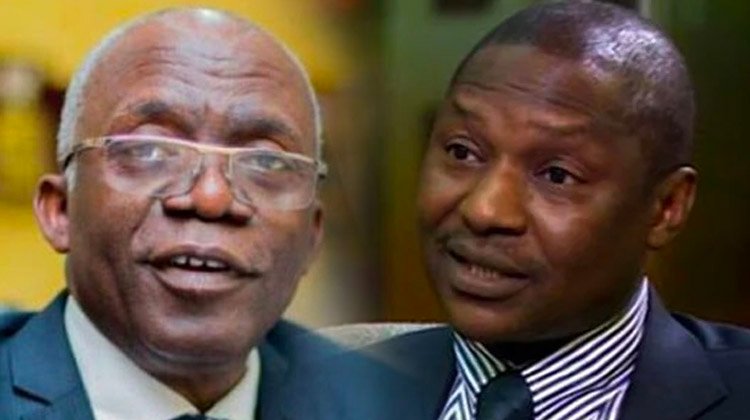 Human rights lawyer, Mr. Femi Falana (SAN), has written a letter to the Attorney-General of the Federation, Abubakar Malami (SAN), threatening to sue the AGF if he fails to recover $62bn from international oil companies as ordered by the Supreme Court.

Falana said this in a letter on Sunday titled, ‘Request for Compliance with Judgment of the Supreme Court of Nigeria in suit No SC. 964/2016 between Akwa Ibom & Two Others v Attorney-General of the Federation’.

The letter was written on behalf of Prof. Omotoye Olorode and Jaye Gaskia of the People’s Alternative Political Movement.

It reads in part, “Our clients have instructed us to remind you that the Federal Government has not enforced the above mentioned judgment of the Supreme Court of Nigeria delivered on October 20, 2018.

“In the said judgment, the apex court had directed the Federal Government to immediately take steps to recover all revenues lost to oil-exploring and exploiting companies due to wrong profit-sharing formula since August 2003.

“Based on the aforesaid judgment, you did request for the immediate payment of the sum of $62bn owed by the six international oil companies with joint operating agreements with the NNPC, namely Shell Petroleum Development Company, Mobil Producing Nigeria Unlimited, Chevron Nigeria Limited, Nigeria Agip Oil Company, TotalElf Nigeria and Pan Ocean Oil Company.”
Falana stated that rather than ensure that the judgment was enforced, the Minister of State for Petroleum, Timipre Sylva, claimed that government would not be able to recover the money.

Sylva was quoted as saying, “Well, we have started discussions. Let us consider that as a lost opportunity, the money was not in a cupboard, they have taken it. Nobody can bring out that kind of money. I mean we can’t get $62bn.

“We can, maybe, get something from them, but not $62bn. It’s an opportunity we have lost. We have already started discussions with them, but what is clear is that it is a lost opportunity, really.”

The activist asked the AGF to ensure that the said sum of $62bn is recovered from the oil companies and paid into the Federation Account without any further delay.

He said that if Malami refused to take action, a suit would be instituted in court forcing him to do so.

The letter further reads, “However, if you fail or refuse to accede to the request of our client, we shall not hesitate to approach the Federal High Court to seek an order to compel you to comply with the judgment of the Supreme Court in accordance with Section 287(1) of the Constitution, which provides that “the decisions of the Supreme court shall be enforced in any part of the federation by all authorities and persons, and by courts with subordinate jurisdiction to that of the Supreme Court.”