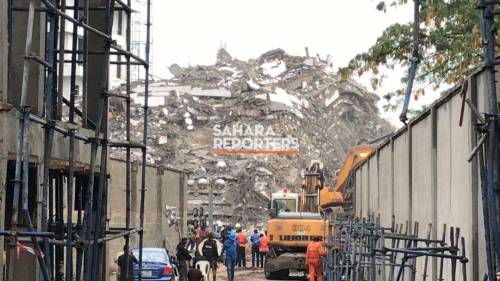 Six more people have been rescued from from the 21-storey building that collapsed in Ikoyi, the Lagos State Governor, Babajide Sanwo-Olu, has said.

According to a statement on Saturday, the number of people rescued from the collapsed building has now increased to 15.

Sanwo-Olu, however, stated that the death toll from the building collapse increased to 42 as of 6pm on Saturday.

The statement was titled, ‘Sanwo-Olu names six more survivors in Ikoyi building collapse, raises number of those rescued to 15 …42 bodies recovered from rubbles so far”.

The statement quoted Sanwo-Olu as giving the update on the search and rescue operation at the scene in company of the National Leader of the Progressives Congress, Bola Tinubu, and Nasarawa State Governor, Abdullahi Sule.

He said “the additional six people were evacuated alive from the collapsed structure”.

According to him, the survivors are presently being treated at the Police Hospital in Falomo, Ikoyi.

He said, “There are additional six people that we’ve also been able to identify and who were on site when the building collapsed. They were taken to the Police Hospital in Falomo for treatment and some of them have been discharged.

“We have taken the full records of survivors in the incident. And this gives a total of 15 people rescued alive. We have a total of 42 bodies that have been recovered.

“Among the latest survivors are a 38-year-old woman, Glory Samson. Others are Ndajor Ahmed, Yunusa Abubaka, Ajiboye Habib, Jeremiah Samson, and one man identified as Emem. While most of them sustained varying degrees of injury, Samson, 20, is said to be in a coma.”
Sanwo-Olu added that 49 families had filled the missing persons’ register as of Saturday morning.

He said the register had helped the State Government to reconcile the details of victims rescued alive and also medically account for bodies recovered.

The Governor added that identification of bodies by relatives had commenced, adding that DNA examination was being undertaken on some of the bodies difficult to be identified by their families.

“There is a sum of money that has been reserved by the State Government for succour and to give for befitting burial for those who died in the incident. Families that so wish to accept it are being supported for the burial arrangement. Also, survivors in hospitals have been given the financial support to help them settle and cope with challenges of feeding in the aftermath of the incident,” he added.

Meanwhile, a crisis is brewing in the Osibona family as his wife and relations are reportedly fighting over the ownership of his property.

It was gathered that the wife, who flew in from the United States of America following the death of her husband, was denied access to the Ikoyi residence of the late developer by his siblings.

Osibona’s wife and siblings were said to have arrived at his residence with mobile policemen to lay claim to his assets, including luxury vehicles, cash, and other valuable items.

But the late developer’s neighbours were said to have shut them out to avoid being caught up in the crisis.

A reliable source close to the family, who confirmed the clash to one of our correspondents, said though the deceased did not die intestate, his family members fought over his assets.

The source said, “There is big fighting going on. The wife had been mostly abroad. There is a will but once a man dies, there is a problem. Instead of them (the family) to focus on the collapsed building, they are looking at the property (on Mosley Road). They are waiting to gain access (to the apartment); they are still there.”
Meanwhile, the search and rescue operation continued at the site, but the heap had receded sharply.