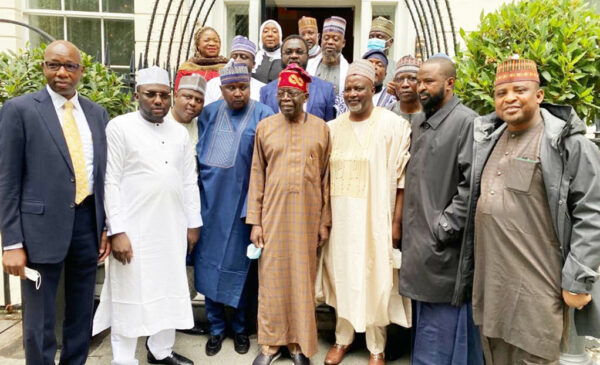 A member of the delegation who craved for anonymity said Tinubu was endorsed for 2023 presidency by the caucus in UK.

“We in the North (House of Representatives caucus) are kind of endorsing his candidature because he is a national leader and you know that he is aspiring (allegedly). Whether you like it or not, he wants to be President of this country. So, we felt that if the northern caucus of the National Assembly – in the House of Reps – would come to see how he is recuperating, we thought that it would mean so much.

“He really appreciated our coming because he said he rated our coming second after the visit of President Muhammadu Buhari. He mentioned that governors and others came but this is a mini Nigeria in the House of Reps, for the entire northern caucus to find time to come and see how he is faring.

“He stood up and walked. I’m sure you have seen the video. I think he has recovered; he is not doing badly at all – this is not politics. I think because of his age, he has to still go for physiotherapy and things like that. These are things that will take time for him to fully do some politicking. He will soon come back to Nigeria.” The lawmaker said,

Meanwhile, in one of the videos from the visit, which has gone viral on the Internet, the lawmaker representing Guevara/Suleja/Tafa Federal Constituency in Niger State, Lado Suleja, called Tinubu “Mr President.”

The lawmakers were seen accompanying Tinubu to a waiting car, during which Suleja said, “Mr President, see you soon,” and the ex-governor replied, “Thank you.”

Speaking on the visit, the source added, “I will not say he is speaking for the caucus. Lado is his loyalist. He has been Tinubu’s loyalist for a long time, we know that. It was Lado that made that statement. All of us – even me – wish he is our President.”

When asked to confirm Asiwaju’s endorsement, Ado-Doguwa stated that it was a ‘get-well visit.’

He said, “I am neither the leader of the delegation nor come as the Northern Caucus, perhaps not the right person to answer your question. But on a personal note, I can tell you that I was on this mission to simply pay a ‘get-well visit’ to the National Leader of our party, the APC, like many other Nigerians have done, including Mr President. My religion and tradition allow for such visits to the sick.

“I, therefore, stand bold to say that I wish Bola Ahmed Tinubu well and pray for his fast recovery. I am further glad to say that I met him in an improved and very encouraging health Condition.”

Meanwhile, in another video, the former governor said he was healthy but only undergoing physiotherapy in London. He said this while addressing the northern caucus.

Tinubu, who was dressed in Kaftan and a red cap, has been in the United Kingdom for about three months after undergoing knee surgery. He however described the physiotherapy as gruesome. “Because of God and people like you, I am well. It is just the physio (physiotherapy) that is gruesome,” he added.

Tinubu’s health had become a subject of controversy of late but in a statement on July 31, 2021, his Media Adviser, Tunde Rahman, said though the former governor was out of Nigeria, he was not hospitalised as claimed by some persons.

“He (Tinubu) is out of the country at the moment. He will be back shortly,” he said, adding that his boss was “hale and hearty”.

Akeredolu and Fayemi had said their visit was not about 2023 but to pay him a courtesy visit. Meanwhile, Akeredolu added, “He’s the capo (di tutti) for us here. By the time he comes, we can make some important decisions.”

Similarly, when asked in an interview if Tinubu discussed his plans for 2023 with him, Gbajabiamila said his discussion with the APC leader “was privileged”.

His long stay abroad has however drawn criticism from some Nigerians who argued that his prolonged medical trip was not a good signal if indeed he planned to become the president.

Reno Omokri, a former aide to ex-President Goodluck Jonathan, had said should Tinubu become President in 2023, he would continue Buhari’s tradition of seeking treatment abroad at the expense of taxpayers.

In recent years, the UK has become a choice destination for the Nigerian elite including Buhari, who frequent London for medical tourism while perpetual industrial actions, lack of modern equipment, inadequate personnel, failure of government to pay doctors’ salaries, amongst others, mar Nigeria’s health sector.