‘Asiwaju Bola Tinubu is back’, Returns to Nigeria after three-month UK medical trip 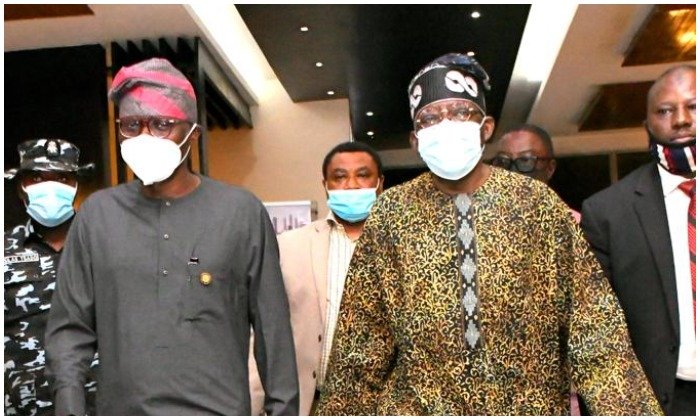 The National Leader of the ruling All Progressives Congress, Asiwaju Bola Tinubu, returned to Nigeria on Friday after about three-month medical trip to the United Kingdom, where he underwent a knee surgery.

The former Lagos State governor arrived in Lagos barely 24 hours after the incumbent Governor, Babajide Sanwo-Olu, inaugurated the South-West Agenda 2023 (SWAGA ‘23), a group rooting for Tinubu as the APC presidential candidate in the 2023 election.

Though Tinubu had yet to declare his intention to contest any office in 2023, there have been rumours and veiled indications that he might be interested in the exalted seat.

Members of the House of Representatives from the North who endorsed Tinubu’s candidacy when they visited him in the UK recently also lent credence to his purported interest.

It was learnt that Tinubu arrived in Lagos on Friday evening unannounced, two days earlier than his reported plan to return to the country.

A statement from the Tinubu Media Office on Friday, titled, ‘Asiwaju is back’, said the ex-governor underwent surgery on his right knee as well as rigorous post-surgery physiotherapy, adding that he was now fully healed.

The statement read in part, “Contrary to unfounded rumour, he underwent no other surgical procedures and contemplates none in the future. His recuperation has been without complication and ahead of the schedule by the attending surgeon.

“He has returned fully healed from the knee surgery and fully committed to doing his modest part of advancing the cause of progressive democratic good governance throughout our beloved nation.

“Asiwaju, first and foremost, would like to thank President Muhammadu Buhari for taking the time to visit him in London to express his wishes for a speedy recovery from the knee operation.

“He is also not forgetting others who would have loved to visit him but couldn’t make it and his numerous friends, associates, supporters and well-wishers who have been with him in prayers and supplications to Allah.”

Meanwhile, SWAGA 23 has said Tinubu already has 12 million votes in the bag ahead of the 2023 presidential election.

The chairman of the pro-Tinubu group, Senator Adedayo Adeyeye, made this known on Friday as a guest on Channels TV’s ‘Politics Today’

He said traditional rulers in the South-West were also in support of Tinubu’s 2023 presidential bid.

The SWAGA chairman, however, said his group was not launched by Tinubu but they were prodding the ex-Lagos governor to run for Presidency in 2023.

Adeyeye said, “When this movement started, we wanted our candidate who some people, particularly in Abuja and some circles, have been saying has no home base; he is no longer popular and all that. We wanted to prove to them that the man is very acceptable, not only in his home base but throughout the country.

“We want everybody in the South-West to rally around this man and support him and so far we have been very successful.

“We have moved round the palaces to see most of our top traditional rulers who have endorsed him.

“Charity begins at home; we wanted to solidify the home base. Once the home base is solidified, I believe other Nigerians, particular in our party, will feel more comfortable to field this candidate, knowing that he can win the election for them.”

Speaking on the chances of Tinubu in the 2023 elections, the APC chieftain said, “Don’t forget that one of the selling points for President Muhammadu Buhari in 2015 was that he already had 12 million votes in his pocket (in previous elections) particularly in the North-West and North-East. So, it was easy with support from a few other places for him to win the presidency.

“We are also saying that come 2023, the man we are projecting already has at least 12 to 13 million votes in his pocket and so it will be easy.”

Asked how sure he was about his statistics, Adeyeye said, “I am giving it (figure) based on what I have seen on the ground, having to transverse the length and breadth of the South-West and having seen people from political parties saying that when it comes to the issue of Asiwaju Bola Ahmed Tinubu, they will shed their partisan toga and embrace him and vote for him. I have seen that in the palaces of the Obas, amongst artisans and market women.

“When it comes to the issue of the Presidency in 2023, all of these people in unison, they will shed every difference and vote for this man.