Uzoka, Wizkid Give Back to Thousands at the UBA Foundation Food Bank0

United Bank for Africa (UBA) Plc, through its Corporate Social Responsibility arm, the UBA Foundation, has launched an initiative to feed the less privileged across Africa during the festive season. 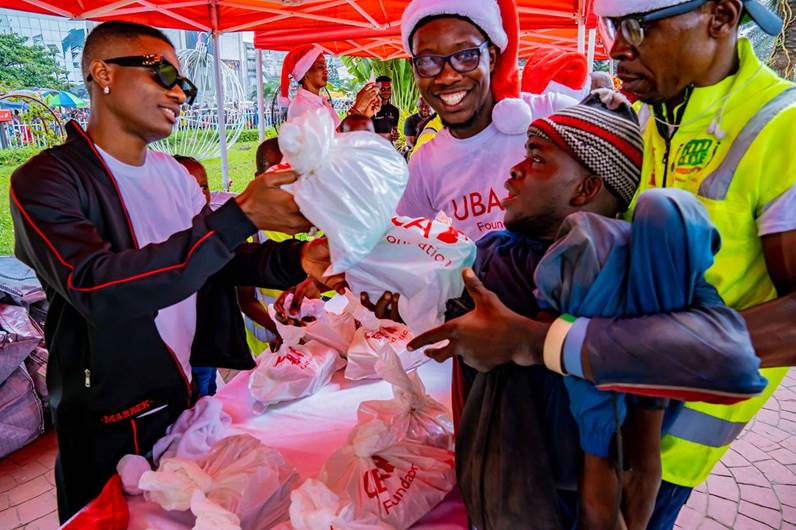 UBA’s Brand Ambassador, Wizkid, handing  over food items and other goodies to the helpless and under-privileged at the Food Bank organised by UBA Foundation at the Foundation’s Garden and Roundabout in Marina, Lagos on Friday.

The UBA Foundation Food Bank is an annual event that aims to give back to society during the yuletide season and this year, thousands of indigent were beneficiaries of the community service freely offered by the bank simultaneously across the African continent.
From Senegal to Ghana, Côte D’Ivoire, Cameroon and many of UBAs subsidiaries, the focus of the food bank is to feed the poor and homeless.  The UBA Foundation Garden at Marina, Lagos was the location of the food bank in Lagos.
UBA Brand Ambassador, Wizkid was delighted to contribute his time and effort to the UBA Foundation’s food bank as he fed the poor and destitute, many who were fans and felt really blessed to be receiving food and other gifts from the star boy.  Expressing his joy at being able to give back meaningfully, he said   “I am excited to be a part of this initiative  which is aimed at putting smiles on the faces of the needy. This is one of my passions and I am fully aligned with Africa’s global bank’ said Africa’s star boy. 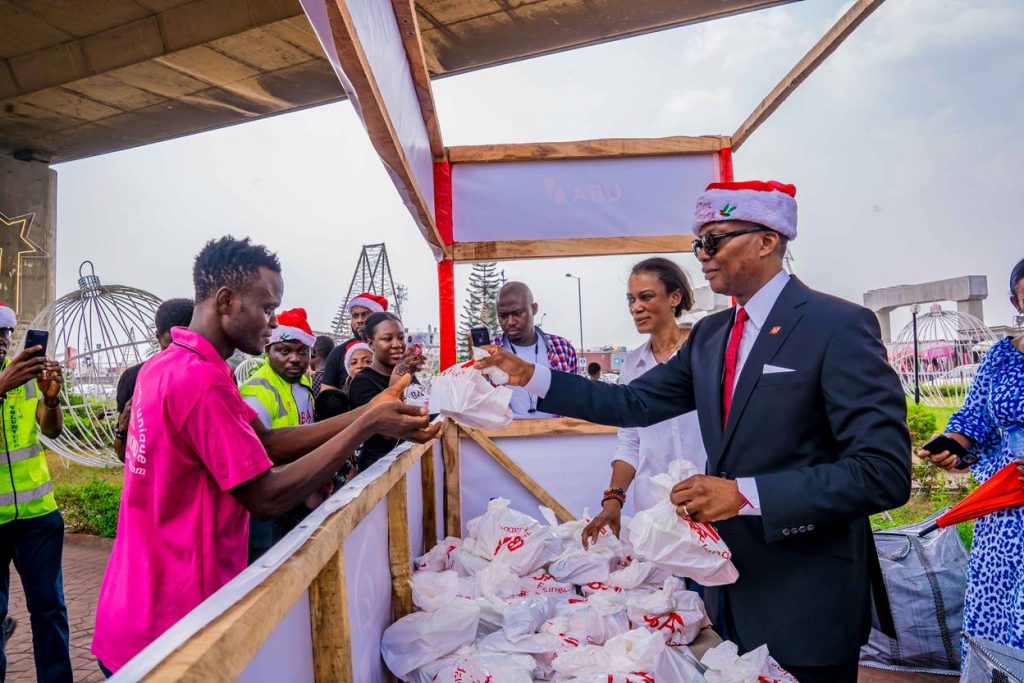 UBA’s Group Managing Director/Chief Executive Officer, Mr. Kennedy Uzoka and CEO, UBA Foundation, Mrs. Bola Atta handing over food items and other goodies to the helpless and under-privileged at the Food Bank organised by UBA Foundation at the Foundation’s Garden and Roundabout in Marina, Lagos on Friday

UBA’s Group Managing Director/Chief Executive Officer, Mr. Kennedy Uzoka who also joined staff of the Foundation and volunteers to feed the needy, explained that the Food bank initiative is one of the ways that the bank, through its foundation appreciates and supports the communities in which it operates, adding that it will be a continuous event.
Uzoka who is also the chairman of UBA Foundation, said, “As you know, giving back is one of our key tenets and we have over the years, engaged in various activities aimed at appreciating our host communities all around Africa and especially in countries where we operate’.

“At UBA , we care for the people in our societies and will continue to do all we can to ensure that we touch lives meaningfully,” Uzoka stated.   The CEO, UBA Foundation, Mrs Bola Atta, said that empowerment is one of the key pillars of the Foundation, adding that the UBA foundation aims to impact positively the lives of those living around the host communities.   According to her, “Over the years, we have embarked on a number of activities that have positively impacted the people who  live in our communities. To be able to feed those who have little is a small gesture that goes a long way.  Those who all lined up to collect their food packs and toiletries seemed happy that someone remembered them. We wanted to let them know that all lives matter. I hope we made many smile and that we gave a glimmer of hope during a special season like this’ Atta said.  One of the beneficiaries who simply gave his name as Abdul said,  “I am very happy with what you people are doing. This morning I didnt even know what I was going to eat. I am really surprised. You people have done very well, we didnt expect this at all. In fact, when my people came to call me, I didnt believe it until I got here. I am here with my three children. This was very unexpected, and we are very happy,” he said excitedly.

UBA staff members were on ground to volunteer their time and services, while a few donated food items to give back to the society in the spirit of the yuletide season.