Violence Breaks In Bayelsa as Diri is sworn in 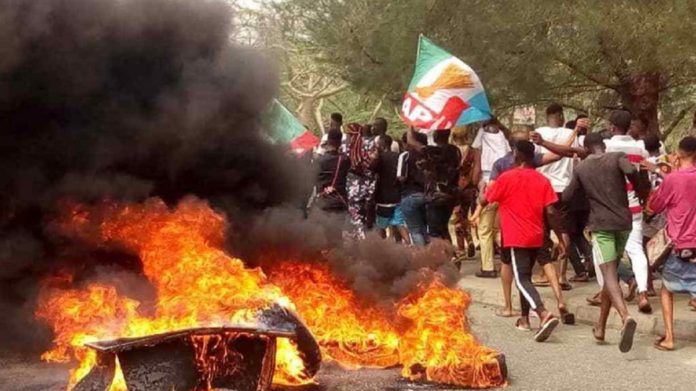 Youths believed to be supporters of the sacked David Lyon stormed the streets protesting Thursday’s annulment of his election by the Supreme Court.

The protesters attacked the Bayelsa State government owned radio station and the private residences of both Diri and Dickson at Opolo.

Vandalized were furniture and fittings. Windscreens of vehicles in the two houses were smashed.

People in the compounds fled to safety.

Other protesters  set  bonfires on the  Kiama Bridge end of the East-West Road , leaving hundreds of travellers stranded.

Security agents however brought the situation under control and  paved the way for the swearing in of Diri as the fifth civilian governor of the state.

Moments after the ceremony, the police imposed a three day curfew on the state to check further violence.

Some other placard-carrying APC supporters gathered at the state party’s  secretariat and the popular Tombia junction from where they  marched to the Government House and the Samson Siasia Stadium, Yenagoa.

The placards carried inscriptions such as “No David Lyon, no governor”, and “We will not allow our votes to get lost”.

The protesters obstructed traffic on major roads in the state.

Mr Alabo Martins, Secretary of APC in the state, said that the protest was to register their grievance over Supreme Court ruling sacking Lyon.

“We have to tell the whole world that we will not agree until Lyon is sworn in.

“This is a peaceful protest and we are doing it to ensure that state have good governance,” Martins said.

The General Manager of  Radio Bayelsa, Dr. John Idumange, condemned the attack on the station.

He said: “APC zealots and militants have destroyed several official and personal cars of staffers and vandalized some offices including accounts, marketing and the General Manager’s office in Radio Bayelsa today.

“The sponsors of this dastardly act are  unknown but feelers indicate that some members of staff who work secretly and espionage for APC are involved.

“We passionately appeal to the law enforcement agencies to investigate the mayhem  and bring the culprits to book.  Meanwhile, we know some staff who were so irked at the Supreme Court judgment that they even shut down the generator under the guise of RATTAWU/NUJ unionism.”

Diri and  Erwujakpor later flew into town from Abuja where they had collected their Certificates of Return from INEC.

By 6.30 p.m the swearing in ceremony had got underway.

Between 6:35pm to 6:55pm, the new governor and his deputy took their  oaths of office and allegiance.

The oaths were administered on them by the Chief Justice of the state, Kate Abiri, who described the event as unique as it fell on Valentine Day.

She recalled that in 2012 when she swore in former Governor Seriake Dickson, she enjoined the people of Bayelsa to pray for his government.

She further appealed to the people of the state to extend such prayers to the new government to lead a successful administration.

We’ve to be magnanimous in victory,says the new governor.

Diri, in his first address to the people of Bayelsa, called for a minute silence for those who were killed in the violence that erupted during the PDP campaign in Nembe Local Government Area.

He said: “My dear good people of Bayelsa State, this is a state that we all wanted to create. As a serving member of the Ijaw National Congress (INC) we traversed the length and breadth of Nigeria and all of us wanting to create the state that can develop our area.

“Today, we have a state. Governors have come and governors have gone. We today have been sworn in of the PDP. My advice to all of us is that we have to be magnanimous in victory.

“Therefore, let us eschew bitterness and acrimony and learn to love ourselves whether of the same party or different parties. Primarily, we are brothers and sisters from Bayelsa State.

Former President Goodluck Jonathan in his message to the new governor urged him to build hope and sustain  peace across the state.

Jonathan described Diri’s journey to the Creek Haven, sobriquet to Bayelsa Government House, as divine and advised him to use the position to do good to humanity.

He said: “I congratulate His Excellency, Senator Douye Diri who was sworn in today as the 5th Civilian Governor of Bayelsa State, in compliance with the Supreme Court verdict of yesterday, 13th February 2020.

“As governor, the responsibility of building hope and sustaining peace across the state now lies on your shoulders. I urge you to always bear in mind that you are the governor of all Bayelsans and to seize this moment of glory to build bridges of unity by entrenching a culture of love, fairness and justice in our polity.

“Your journey to Creek Haven is a divine one, so I advise you to use the position to do good to humanity and pursue the development of the state in order to write your name in gold. You have worked with me before as a commissioner, so I am without doubt that you will live up to the expectations of our people.

“I call on all Bayelsans to be law-abiding, peaceful and embrace this transition in all sincerity, and work together towards a united and prosperous state.”

The police in Bayelsa State swiftly imposed a curfew to check the violence  in the state.

Police Commissioner  Uche Anozia, said the curfew would last between 8pm to 6am beginning from yesterday to tomorrow.

He said eight persons had been arrested so far for violent conduct following the protest rocking different parts of the state.

The ousted Bayelsa State governor-elect, Chief David Lyon , yesterday  rejected the verdict  of the Supreme Court that stopped his swearing-in.

He said Diri did not deserve to be inaugurated as   governor because  he did not meet the constitutional requirements as directed by the court.

Lyon who spoke through  the member representing Southern Ijaw Federal Constituency in the National Assembly, Preye Oseke, described the judgement as shocking and procured.

He said the APC and the people of Bayelsa totally rejected the judgement and called on the Independent National Electoral Commission (INEC) not to issue Certificate of Return to Diri.

Lyon argued that even based on the pronouncement of the court, Diri was not qualified to be sworn-in as he failed to meet the constitutionally required geographical spread in the election.

He said: As a people and party, we are rejecting the judgement completely. It is a procured judgement. While we have our respect for our revered justices, we believe that this is not the wish of Bayelsans.

“As a party, we are law abiding. Our properties had been destroyed even in the midst of the judgement. But we are calling on all our party supporters to remain calm while our leaders, stakeholders meet and come up with the next line of action.

“We  believe that the right thing will be done and the rule of law will be upheld.”