Why we beheaded businessman, dismembered his body — Bello Mohammed 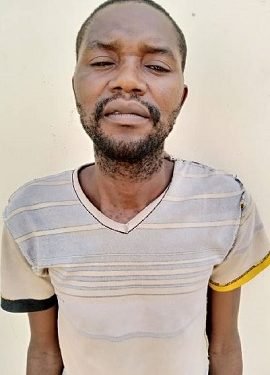 A businessman and owner of a sachet water factory abducted from his home in Lafia, Nasarawa State has been killed by his abductors. Mr. Osondu Nwachukwu was said to have been stabbed to death by his abductors following the inability of his wife to raise the N5 million demanded as ransom.

A source  who spoke with our correspondent, however, said disclosed that the wife  was able to borrowed the some demanded by the kidnappers, but by the time she could get across to them, they had killed him and packed his dismembered body in a sack.

But when his killers were about to dispose his corpse some Fulani men who were returning from the mosque were said to have seen them pushing something in a truck. The Fulani men asked them what they were carrying, but before they could raise the alarm, the suspects ran away.

The Fulani men were said to have reported the matter to the police, following which the Force Intelligence Response Team (IRT) waded into the matter and arrested one Bello Mohammed, a native of Agyeregu Tasha in Lafia Local Government Area, Nasarawa State, on March 11.

Mohammed has since confessed to the crime, saying he was part of a notorious kidnapping and cattle rustling gang and identifying other members of the gang as Maikano, Dogo, Hassan and Jubril.

He told the police that it was an Igbo man in Lafia that brought the idea that they should kidnap the late Nwachukwu, an Igbo trader who until his death resided at Tudun Kauri, Makurdi Road Lafia, on September 30, 2019.

He said the gang decided to kill him because the family was not willing to pay ransom on time, after which they dumped his body in a bush at Bukan Koto along Makurdi Maraba-Ankunza Road, Lafia.

Speaking amid tears, Nwachukwu’s widow said: “We are blessed with six children. My husband owns a pure water factory and I normally joined him to run the business.

“I was at home on Friday, 30th of November, 2019 when some kidnappers stormed our house and abducted my husband.

“Later in the night, I received a call that I should bring N40 million if I wanted to see my husband alive.

“I pleaded with them to have mercy as it was a Friday and banks had closed.

“They asked me how much I had and I told them N40,000. They asked me to bring the money and I did that night.

“We were waiting to hear from my husband when I received a call from them that I should not bother as my husband was dead.

“I was told that the person that arranged his kidnap is from the East but I was not suspecting anyone at all.

“God will punish the person behind my husband’s kidnap and death.”

In his confession, Mohammed, 37, said: “I am from Nasarawa State.  I have two wives and eight children and I am a cattle farmer.

“Things are hard for me as a farmer with eight children. It was my brother in-law, Dogo, who encouraged me to join them. He was the one that took me for the first job. He heard that things were hard for us and decided to show me the way.

“On the kidnapping of the Igbo man, it was another Igbo man that brought the job, He told us that the man owned a pure water business and was very stingy. He assured us that the man would pay at least N10 million because he was so rich.

“He gave us all the details about his movement and that the best place to pick him up was his house.  We went with three motor bikes at about 8.30 pm and hanged around his compound.

“Meanwhile one of us waited for him at the factory area and followed him home. He was the one who alerted us when they were on the way to the house.

“As soon as he drove into his compound around 9 pm, we followed him and over powered him. We searched his house for valuables and dragged him along.

“We carried him on our bike and threatened to kill him if he dared raise the alarm.

“When we got to a spot, we stopped and trekked for hours into Bukan Koto forest in Lafia.

Inside the forest, there are many Fulani farmers living with their wives and children. There, Dogo has a small hut where we used to keep our victims.

“We called his (Nwachukwu’s) wife to bring a ransom of N5 million and she said it was weekend.

“While we were at the hideout, the Igbo man who gave us the job called and we told him the situation of things. He said that the wife was lying and not serious about saving the life of her husband.

“Unfortunately, the man overheard our conversation and was able to identify the person that gave us the job.  The man told us to kill him after collecting the money.

“We were ready to spare him but his wife was not making any serious effort. So Dogo got angry and said that he was no longer interested in the job. The man begged him but Dogo was too angry, and before we could hold him, he used his machete to cut off the man’s head.

“Since he was already dead, Dogo cut his body into pieces and packed them in a sack. I and two others were given the body to go and dispose at the nearest river. If we tried to dig the ground and bury him, the people might notice.

“We were conveying his dismembered body a wheel barrow about 7 pm on a Sunday when we were stopped by some Fulani men who were coming back from the mosque. We all left the corpse and ran away. I guess they were the ones who reported the matter to the police.”

Mohammed said the highest amount he ever made from an operation was N1.3 million, which he said he got from cattle rustling.

“The only way to stop kidnapping is by arresting the kingpins and making them to pay the price as the law dictates, because they are recruiting boys regularly to replace the ones that were killed or arrested.

“I take tramadol and marijuana every day, and these drugs are expensive. We now have 25ml of tramadol, which is stronger. Everyone takes it and we give it to the person that we kidnap so that they will have strength to trek for hours into the bush.

“Usually, after every successful kidnap operation, we would set money apart with which Dogo would buy plenty drugs that would last us at least two weeks before we did another job.”