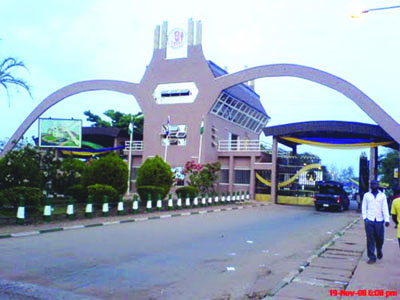 Vice Chancellor of the University of Benin, Professor Faraday Orumwense, yesterday explained why the institution recalled five students who were rusticated for protesting against increment of various fees.

Prof. Orumwense said the students were not rusticated for protesting but for attempting to disrupt the University’s 47th Founder’s Day and 43rd Convocation ceremonies.

Orumwense who denied banning campus fellowship said the five students were recalled after intervention from various groups and well-meaning individuals.

They were also barred from holding any office in the campus or participating in student union activities.

Prof. Orumwense noted that the protest by the students on November 23 was uncalled for and designed to serve the illegitimate purpose of portraying the institution in bad light as well as disrupting the academic calendar.

The UNIBEN VC said the new charges were meant for new students and not old students, adding that the protesters pelted the convoy of Sanusi with sachet water.

According to him, “On November 23rd, the students demonstrated during the last convocation and that led to the closure of the university for some weeks. After Senate waded into the matter, committees were set up to find out the remote and immediate causes of their protest. Some were exonerated and others were rusticated for one or two years.

“The students charges that were increased were meant for the new students and when the students complained to the Dean of Students. The Dean allowed the council to look into their complaints before they went on protest.

“Several groups waded in that we should pardon them. So many groups pleaded for their return. We saw them as our children and having looked at pleas from various groups, we took a keen look at the punishment meted on them and they have been called back to return to their studies.

“We have met some of their requests, we have reduced the hostel charges and others. They are our children. We have told them to go and sin no more.

“There is no ban on Christian fellowship in UNIBEN. It is not true.”