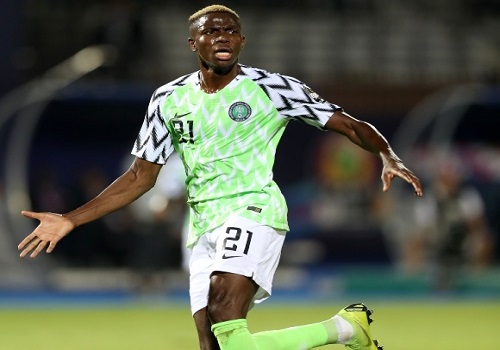 Victor Osimhen and Ahmed Musa were on target as Nigeria defeated Liberia 2-0 in their 2022 Fifa World Cup qualifying match on Saturday.

Despite coming back from international retirement, Al Shabab striker Odion Ighalo did not make the match day as Gernot Rohr went for Nantes’ Moses Simon, Leicester City’s Kelechi Iheanacho and Napoli’s Victor Osimhen in the attack.

The visitors started the match on the strong foot and it did not take long for them to open the scoring at the Stade Ibn Batouta.

Iheanacho made a fine run to the penalty area when goalkeeper Boison Wynney brought him down and referee Youssef Essrayri instantly pointed to the spot.

Osimhen stepped forward and brilliantly converted from the penalty in the 15th minute to give the Super Eagles the lead.

Everton star Alex Iwobi was in fine form for Rohr’s side from the middle of the park and they continued their dominance in ball possession.

Following his fine contributions from the left flank, Jamilu Collins put the ball into the back of the net in the 29th minute but it was ruled out for offside.

Nigeria’s midfield stood out in the opening 30 minutes and shortly after the disallowed goal, Osimhen was through on goal but failed to hit the target to double the visitors’ lead.

Towards the break, Maduka Okoye was called to action and he made some eye-catching saves within five minutes to preserve the Super Eagles’ lead.

In the last minute of the game, Osihmen was brought down by the Liberian goalkeeper and Musa stepped forward to convert from the penalty spot.