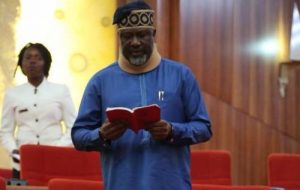 Aspirants on the platform of the Peoples Democratic Party for its Kogi West Senatorial District ticket have vowed to work against the party in the 2019 general elections.
The aspirants in Abuja on Saturday protested what they called their unjust disqualification by the party from the race.
They, however, vowed not to quit the party but work against it in the 2019 elections, should the party leaders fail to do the needful over the alleged injustice they claimed had been meted to them.
In a statement in Abuja on Saturday, the aspirants also accused the President of the Senate, Dr. Bukola Saraki, of being the architect of their last-minute disqualification.
They said they were meted with the treatment in order to pave the way for Senator Dino Melaye who recently defected to the party from the All Progressives Congress.
The disqualified aspirants are a member of the House of Representatives, Sunday Karimi; a one time Speaker of the state House of Assembly and former Acting Governor  of the state, Mr. Clement Obafemi; a two-time member of the state House of Assembly, Mr. Henry Ojuola and a former member of the State  House of Assembly and former Chairman of Yagba East Local Government of the State respectively,  Mr. Oreniya  Salaudeen.