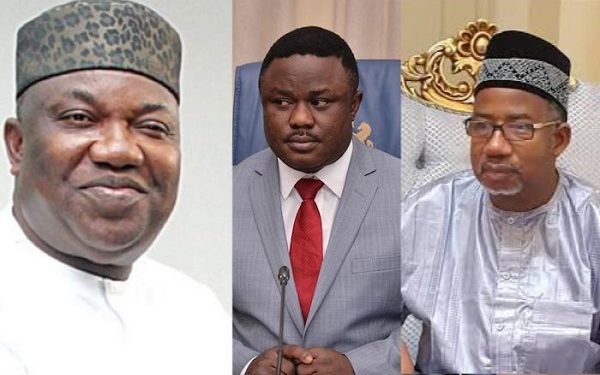 … Secondus, Bauchi governor under attack
….Southern govs, others to meet
Peopls Democratic Party (PDP) controlled state governors appear to be at loggerhead over the report of the Bala Mohammed-led committee which recommended that the party’s presidential ticket for 2023 be made an all-comer affair.

The committee was charged with the responsibility of investigating the party’s loss at the 2019 polls.

But its recommendation that aspirants from all the six geo-political zones in the country should feel free to seek the party’s presidential ticket ahead of the 2023 election has not gone down well with some influential governors from the party.

Some of the governors claim Bala Mohammed had an ulterior motive for calling for the cancellation of zoning after the South East had been made to believe that it was its turn to produce the presidential candidate in the next polls.

The revelation of the recommendation had sparked a flurry of protests from some quarters, especially the South East.

This development forced the National Publicity Secretary of the PDP, Mr. Kola Ologbondiyan, to issue a statement that the recommendation was yet to be discussed and adopted by the party’s hierarchy.

But the statement by Ologbondiyan has not succeeded in assuaging the feelings of some members.

Reliable party sources said yesterday that the division created by the recommendation was festering by the day.

“Many governors are disappointed at the decision of the Bauchi governor to submit the report and even make its resolutions public,” one of the sources said.

“This is because the issue was already being debated among the governors prior to the submission of the report.

“The governors were not on the same page over what the party should do about zoning as regards the 2023 presidential ticket of the party.

“Even some members of the committee disagree with Governor Mohammed on the recommendation.”

Apart from Bala Mohammed, other members of the committee were the deputy national secretary of the party, Emmanuel Agbo who doubles as secretary of the panel; Sule Lamido and Tanimu Turaki, both representing North West; while Yakubu Dogara and Alhasan Muhammadu were selected from the North East.

One of the dissatisfied panelists said: “It is wrong for Governor Mohammed to have submitted that report because that wasn’t the position of all members of the committee.

“As at the time of the submission and publicizing of that report, opinions of committee members on the crucial issue of zoning and the 2023 presidential ticket were still sharply divided.

“I want you to go and ask members of the committee if truly we agreed that the PDP presidential ticket should be thrown open in 2023. We never did.

“The only thing I know is that some members openly expressed the need for the party to respect zoning while others want the party to consider the prevailing political factors as we approach 2023.

“At no time did the committee agree that zoning should be done away with. But it is obvious right from inception that the committee was being influenced by some external forces.”

Sources also said some governors, especially those from the south, accused the committee chairman and the national chairman of the party, Prince Uche Secondus of using the report to advance the 2023 chances of former vice President Abubakar Atiku.

“A governor from the southern part of the country has openly accused Governor Mohammed and Prince Secondus of using the report to favour Atiku,” said another source.

“The governor claimed that the report he received from his state’s representative on the committee is contrary to what Mohammed presented to Secondus.

“The governor also claimed that the PDP Governors’ Forum got wind of the report that was presented and following complaints by some governors, cautioned that the committee should desist from making such public.

“He alleged that the national chairman insisted that the presentation of the report should go on. It is our belief that the committee is being used to achieve a pre-meditated goal.

“The report is not the position of the committee as constituted, but the parochial view of a few members as encouraged by a partial arbiter,” our source claimed.

The Nation also gathered that PDP governors from the south may soon meet over the development.

According to sources, some southern governors are angry that their northern colleagues are tacitly supporting moves aimed at jettisoning the zoning principle ahead of the 2023 presidential election.

They have also allegedly expressed concerns that the national leadership of the party is indulging the anti-zoning gladiators over and above those supporting the zoning arrangement.

A source said “dissatisfaction with the report is growing and threatening its relative peace. The issue of zoning is a crucial issue and we are afraid that some people are playing some funny games.

“The leadership of the party has repeatedly said the PDP will not take decision on zoning just yet. But what they did with the Mohammed report was to suggest a decision through the back door.

“Governors of the southern states and other stakeholders from the zone are not about to allow such pranks.

“Efforts are on to rally concerned chieftains of the party to get the matter discussed as soon as possible. I know the governors are also planning to meet over the matter.

“While some of them have expressed their objection to the report, others are waiting for a formal meeting to state their positions on the matter.”

Presenting the committee report in Abuja, Mohammed had said the exigencies of the moment demand that nothing should be compromised in choosing a leader with the attributes to reposition the country.

“Therefore, we think that every Nigerian, from every part of the country, should be given the opportunity to choose the best candidate, through a credible primary election as a way of institutionalising a merit-based leadership recruitment process, for the country,” he said.