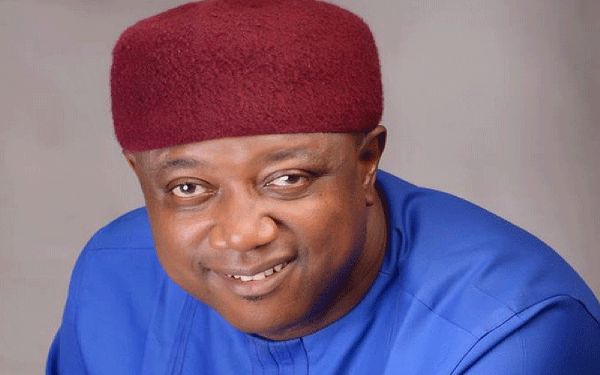 The Supreme Court has reversed disqualification of Chukwuma Francis Ibezim as candidate of the All Progressives Congress (APC) in the December 5, 2020 by-election in Imo North Senatorial District of Imo State.

In a unanimous judgment on Friday, the apex court set aside the February 6, 2021 judgment of the Court of Appeal, Abuja which affirmed the December 4, 2020 judgment of the Federal High Court, Abuja disqualifying Ibezim for submitting false information to the Independent National Electoral Commission (INEC) in relation to his age, name and academic credentials.

Justice Emmanuel Agim read the judgment of the Supreme Court on Friday during a virtual court session, in which lawyers to parties participated through Zoom.

The court resorted to the virtual session in view of the ongoing nationwide strike by court workers under the aegis of Judiciary Staff Union of Nigeria (JUSUN).

Justice Agim faulted the competence of the suit on which the earlier judgment of the Federal High Court was given on December 4, 2020.

He also faulted the mode of commencement of the suit at the trial court.

Justice Agim held that the suit which led to Ibezim’s disqualification was statute barred because it was not filed within the stipulated time.

He noted that the suit was not filed within 14 days when the cause of action arose.

He added that Section 285 of the 1999 was not complied with by the plaintiff at the trial court, because being a pre-election case, the mandatory 14 days for such suit to be filed ought to be strictly complied with.

Justice Agim held that since Ibezim was disqualified by the trial court and the Court of Appeal based on a case that has been found to be statute barred, such disqualification amounts to a nullity.

He faulted the findings of the trial court judge, Justice Inyang Ekwo, and held the plaintiff failed to discharge the burden of proof of false information that was alleged.

Justice Stephen Adah, had while dismissing Ibezim’s appeal in the judgment of the Court of Appeal delivered on February 6, 2021, resolved the two issues identified for determination against the appellant, saying that the finding of the trial Federal High Court was unassailable to warrant any interference by the Court of Appeal.

Justice Adah found that the appellant (Ibezim) violated Section 66(1)(i) of the Constitution by presenting forged certificate to INEC.

He held that Ibezim was not qualified to contest the election. It also held that the suit was not statute barred, having been filed 11 days after the occurrence of the cause of action, thereby falling within the 14 days prescribed for the filing of a pre-election case under Section 285(9) of the Constitution (4th Alteration).

He warned that a candidate who wants to supply information to INEC in any general election “must be diligent and strictly faultless in respect of the entries made thereof; the arrangement of the name of an individual must be seen as a serious venture.

“The candidate must be diligent in doing that. If the name of a person is misspelt or is misarranged, it tells a lie about his name… if the name are written out of tune or out of order, the name will be manifesting names of the person other than the person claiming it.”

The judgment was in the appeal marked: CA/A/1085/2020 filed by Ibezim against the judgment of the Federal High Court, Abuja.

Other members of the panel of the Court of Appeal that decided the appeal were Justices Abubakar Yahaya (who led) and Uchechukwu Onyemenam.

Justice Ekwo had, in the December 4, 2020 judgment in the suit, marked: FHC/ABJ/CS/1229/2020 filed by Asomugha Tony Elebeke, found the WASC certificate Ibezim submitted to his party, which the APC in turn handed to INEC, contained different and irreconcilable names – Ibezim Chukwuma Frank and Ibezim Francis Chukwuma.

The judge said: “There is something wrong with these results. The defence of the 1st defendant per the averments in paragraphs 26, 27, 28 and 29 of his counter-affidavit has not explained the variations in the three respective result sheets, neither have the said averments debunked the fact that Exhibits A26, 27 and 28 were submitted to the 3rd defendant by the 2nd defendant or that the certified true copies of these exhibits were not obtained from the 3rd defendant.

“The 1st defendant, having not taken any step to controvert the case of plaintiff concerning the falsity of Exhibits A26, A27 and A28, has therefore allowed the case of the plaintiff to remain uncontroverted.

“I therefore find that Exhibits A26, A27 and A28 submitted are not authentic results and are self-contradictory. Therefore, they are false in all material particular and I so hold. I resolve issue one in favour of the plaintiff.

The judge found that Ibezim failed to prove that the various names in his credentials are one and the same.

Justice Ekwo faulted Ibezim’s claim that it was his elder brother – Emmanuel Ibezim – who signed the declaration of age he submitted, noting that the signatures in the age declaration document and other documents he (Ibezim) admitted signing look the same.

“I find that the allegation that the 1st defendant signed the statutory declaration of age for himself (Exhibit A25) as the declarant/deponent, but purported to do so as his elder brother, Emmanuel Ibezim, is established with uncontroverted evidence in this case, ” the judge said.

Justice Ekwo also faulted the affidavit and newspaper publications Ibezim submitted in support of his claim that the names were all his.

“Again, I do not think that the 1st defendant can use affidavit to correct the names. It is common sense to state that the certificates were not issued by the court but the institutions authorised to issue them.

“If there is any error on any academic certificate, it is the institution that issued it that has the power to correct the error not the High Court Registry. It is in this regard that I find that Exhibit SF16 which is the affidavit of conciliation of name is bereft of probative value and I so hold.”