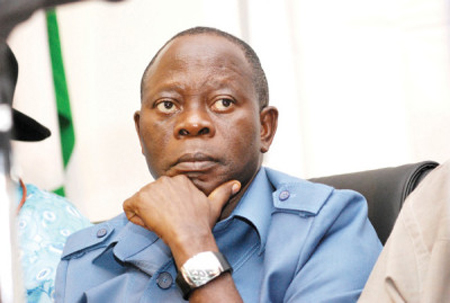 The coast was clear yesterday for former Edo State Governor Adams Oshiomhole to be crowned on Saturday as All Progressives Congress (APC) National Chairman.

On Wednesday, another contestant, who is also a former Edo State Governor, Prof.  Osarheime Osunbor, quit the race.

Oshiomhole will now need a mere affirmation of the delegates to get the prize.

Ebri said he was pulling out of the race after due consultations with family, friends and associates.  He promised to support Oshiomhole.

Ebri said in his letter of withdrawal: “Following deep consultations with my family, friends, associates, party leaders and other stakeholders in the progress of our great party, the All Progressives Congress (APC), l have reached the decision to withdraw my candidacy from the race for National Chairmanship of APC.

“This decision has been in what l consider to be the overall  interest of the party and my belief that all stakeholders must row in the same rancour free direction as we approach general elections in a few months.

“I believe that those who occupy formal positions in the APC are the helmsmen of the Nigerian ship of state. What happens in the leadership of this country’s ruling party, the APC, is directly responsible for whether we can deliver on our promises to our people to provide them with a new lease of life. This was the core conviction that drove me to declaring my candidacy for this office in the first place,

“I believe too that a fundamental task of the APC is to win elections. After this is achieved, it behoves the party to offer its elected officials a means for organising government as it then becomes the primary link between the people and government. I considered myself  well suited for this and other enormous responsibilities and, on that basis, proceeded with my campaign.

“My sincere gratitude goes to everyone who believed in me sufficiently to invest their time, energy and other resources in that process. I hope that, in recalling their tireless sacrifices during that period, they will not feel disappointed at the decision that l am announcing now but will rather feel inspired by it and gear up to the large visions of service underlying it.

“I enjoin them as faithful party loyalists to transfer the support they had hitherto reserved for my candidacy to our aspiration for peace in the party and endorse Mr. Adams Oshiomhole as national chairman.”

Members of the APC in the diaspora and the Association of former Local Government Chairmen and Councilors of Nigeria (AFLOG) also endorsed Oshiomhole’s candidature.

The group, led by Lady Chidinma Onyekwelu, said the former governor was the right man to reposition APC at this critical point in time owing to the task ahead.

Supporting Oshiomhole and others, according to the group’s leader, was because such people would not distract President Muhammadu Buhari from his duties.

The group said with Oshiomhole’s experience as a former labour leader, activist and governor, the APC would be redirected to the progressive ideas of its founding fathers.

It maintained that Oshiomhole’s antecedents as a former leader stood him out among other contestants.

”Oshiomhole as chairman will deploy his persuasive powers and negotiating skills in resolving any crisis that may arise within the party.”

He added that their decision to back Oshiomhole was informed by the need to handover the party’s leadership to a competent hand.

Chris said: “During his tenure as labour leader, he negotiated a 25 per cent wage increase for public sector workers. While he was NLC president, Oshiomhole kicked against neglect of local oil refineries, which led to reliance on imported gasoline, followed by rise in the price of fuel.

“As a result of his activities, a newspaper declared him Man of the Year in the Year 2000, in recognition of his immense contributions to popular struggles.”

No fewer than 6,800 delegates are expected to vote for aspirants at its Saturday’s convention,

Ajimobi, who spoke after the committee members inspected the Eagle Square, venue of the convention, added that the party was prepared to ensure a rancor free convention.

“We are very happy about all the preparations, everything is in place. You can see what we call a very professional arrangement for tomorrow,” he said.

”Politics is about conflict and resolution. Today, we are meeting the aspirants to interview them. There will be a give-and-take so that it will be a smooth operation on Saturday,” Ajimobi said.

Former Zamfara State Governor Ahmed Yarima, who is the Chairman of the Convention Subcommittee for Accreditation, said the committee was screening and accrediting  delegates from the 36 states and Federal Capital Territory (FCT).

”We are going to put numbering and security code so that as soon as you come to the gate you are properly identified, screened and then you enter.

“Even as they vote inside, you have another card that you present so you can be allowed to vote.”