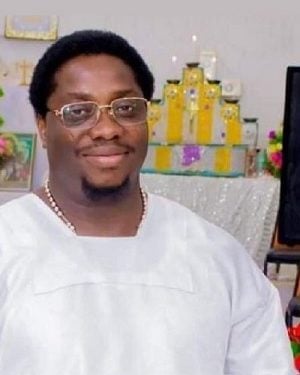 ….as family alleges foul play, demands identity of seven elders that prayed for him.

Badru, a roundly built successful businessman and socialite who shuttled between Nigeria, Europe and the United Arab Emirates, had hesitated in leaving their palatial residence at No 13 C, Morin Street, New Oko-Oba near Abule Egba on April 26.

”He was restless before he left home on the fateful day. He left our room and returned three times midway the staircase before he finally left,” Kofoworola said.

”He kept saying he forgot something until he finally left home after turning to the room three times.

“He did not eat before he left home, so he asked me to prepare chicken stew and rice for him.

”He told me he was going for prayers at his late mother’s church around Magboro area in Ogun State. He left home around 10 am and promised to come back by 2pm.”

Unknown to his wife of four years, her husband had gone to another Celestial Church parish for the prayers which turned tragic and terminated their four-year-old conjugal bliss.

While Kofoworola was still wondering why her husband had not returned home to eat his favourite meal at 2 pm, cruel fate had played a fast one the Abeokuta-born father of four.

At the church, her husband had clenched his fingers around seven lighted candlesticks and knelt down swathed by seven elders who poured effusive prayers on him to overcome evil.

In the middle of the prayers, the prayer warriors were said to have sprayed him with some spiritual perfume. But before they knew it, the perfume ignited fire which burnt Badru beyond recognition.

He was rushed to the Gbagada General Hospital, where he eventually died on May 4.

“I did not know that he went to another church, the Imole Cathedral of the Celestial Church of Christ. Although the shepherd of the church is his friend and he was the one who facilitated the opening of the church’s branch in Dubai, UAE.

“I became worried when he didn’t return home on time. A few hours later, I was told that he was involved in an accident during the prayers.

”I called his phone at about 2 pm but he didn’t pick his call. At about 5pm, I got a call from the shepherd of the church that my husband was involved in a little accident, and I went to the church.

”At the church, I was told that one of the elders that were praying for my husband sprinkled perfume on him and it triggered fire from the burning candlesticks he was clutching and burnt him.

”On seeing how pathetic my husband’s condition was, I demanded to see the lady who was said to have sprinkled perfume on my husband, but they were just calming me down and did not allow me to see the lady.

“My husband too was calming me down, including the shepherd of the church, Prophet Felix Alebiosu a.k.a. Ebony.

”My husband later developed an infection on his body and he died on May 4, 2021.”

Curiously, when the incident happened, Kofoworola said she was asked by the shepherd of the church, Prophet Felix Alebiosu, not to inform her husband’s family members, assuring her that the situation was under control.

She said: “I was told by Alebiosu not to inform my husband’s family that he was in the hospital. But I eventually did because I couldn’t keep them in the dark for long.

”My husband had no particular parish where he worshipped. He worshipped at any parish he was invited to, and I had accompanied him to worship at this particular church, where he got burnt a few times.

“Besides, he was very close to Alebiosu because he worshipped at a branch of the church in Dubai.

“He is survived by four children. I have two with him while he has two children from his previous marriage.

The 31-year-old widow described her late husband as a man with a large heart even on the sickbed.

”Kayode loved life and was always willing to help people, and he didn’t joke with his children. He had a large heart and always wanted to help people.

“Even on his sickbed in hospital, he was still helping some patients out with their medical bills.”

Recalling his last moments with the deceased, his younger brother, Oluwaseun Badru, also a priest of the Celestial Church of Christ, said there was more to the incident than meets the eye.

“I was called to come see my brother, Kayode Badru, at the Gbagada General Hospital. I saw him in a critical situation.

“Unfortunately, by the time he got up, the deed had been done as he had been severely burnt. However, my question is where are the seven elders that prayed for him while he was burning? I ask this question because doctors said he was burnt up to the fifth layer of his skin. So, for how long was he held down and how long was the prayer session that those who prayed for him didn’t know that he was burning in their midst?

“I asked the shepherd of the church, Prophet Felix Alebiosu, who led the prayer session for my brother if there were monetary transactions between him and my brother, and he said no. He told me that my brother wasn’t that rich, contrary to what he had earlier told me.

“What baffled me was that my brother told his family he was going to our mother’s parish in Magboro, only for him to visit another parish where he was burnt to death as a result of the perfume poured on him while he was holding candlesticks already lit.”

Oluwaseun urged the police to ensure that justice is served in the matter, noting that other suspects on the run must be arrested and prosecuted.

“Alebiosu and two others have since been arrested and are now in police custody at the State Criminal Investigation Department (SCID), Panti, Yaba, Lagos.

“We heard that the suspects are receiving preferential treatment. However, what we want is justice for our late brother.

“Other fleeing suspects must be arrested and made to face the wrath of the law, because that is the only way justice can be served in this matter.”

Also demanding justice, another younger brother of the deceased, Oluwagbenga Badru, said the circumstances surrounding the death of his elder brother were not real.

He said he suspected foul play and urged the police to carry out thorough investigation and apprehend all those involved in the case with a view to ensuring justice.

He said: “I still find it difficult to believe that perfume was the only substance responsible for my brother’s death. Is it possible for perfume to burn a man up to the fifth layer of his skin without those praying for him perceiving the smoke from the burning?

“Besides, there is another version being bandied by the elders at the prayer session which suggests that the fire started from a burning candle which spread to the spot my brother knelt down and consumed him while praying. So, on this score, the police should arrest all those involved and bring them to book without fear or favour.”

An impeccable source at SCID, Panti, Yaba, confirmed to our correspondent that some persons had been arrested in connection with the case.

“We have arrested the shepherd of the church where the incident took place and two other suspects, and they are in our custody right now. Efforts are being made to arrest other persons involved in the case and carry out a diligent investigation.

“The suspects in our custody will appear before the Deputy Commissioner in charge of SCID this week for proper briefing on the matter.”

Meanwhile, the authorities of the Celestial Church of Christ (CCC) has issued a statement blaming the incident on abuse of perfume by members of the church.

The statement issued by the pastor of the church, Rev. Emmanuel Oshoffa, urged the pastor-in-council to prevent such abuse in the future.

The statement reads in part:  “Calvary greetings to you in the name of our Lord Jesus Christ who has called us into His Glory.

“Due to the incessant abuse of spiritual perfumes within the church, His Eminence has found it imperative to state for record purposes and correction that henceforth, spiritual perfumes intended to be sprayed, sprinkled or poured with a lighted candle should be diluted with water.

“The spraying or pouring of undiluted spiritual perfumes in its volatile state with a lighted candle is an imported culture not originally part of the tenets of the Celestial Church of Christ.

“The laid down usage of spiritual perfume within the spheres of a lighted candle by the pastor founder, Saint SBJ Oshoffa, is by mixing it with water. It is high time we retraced our steps for a greater Celestial Church of Christ.

“We are all advised to adhere to this directive. Any parish or member that goes against this directive will be solely responsible for the resultant effect.

“The pastor has also directed the pastor-in-council to come up with a policy document to curb alien practices that have been introduced into the tenets and doctrines of the church to safeguard the church’s divine culture as instructed by the Spirit of God through the pastor founder,” the statement added.