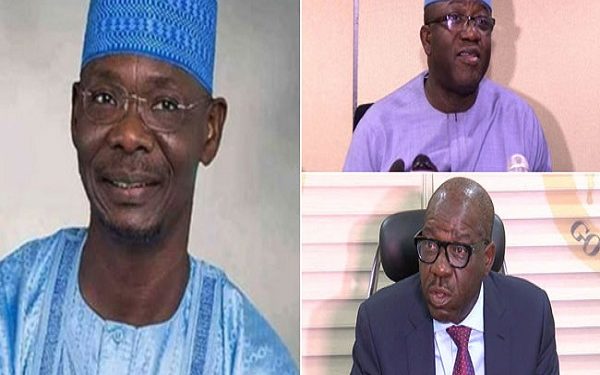 Following the positive COVID-19 result for Chief of Staff to the President Mallam Abba Kyari and Bauchi State Governor Bala Mohammed, some of the governors who had contact with them have gone into self-isolation.

No fewer than eight ministers have also been tested to determine their status.

Both Kyari and Mohammed attended high-level government meetings before the results of their test were received.

Fayemi, who is the Nigeria Governors Forum (NGF) chairman, said he took Coronavirus test despite not having any of symptoms of the virus.

He however did not say the outcome of the test in the tweet in which he explained that he opted to isolate in order to protect people that may have come in contact with him.

According to a statement by his Chief Press Secretary, Yinka Oyebode, Fayemi said: “No cause for alarm, I just took this step as a normal precautionary measure.

“In the circumstance we find ourselves today, every citizen must engage in personal hygiene and take actions that can help us overcome this challenge and that is exactly what I have done.

Adviser to Obaseki, Mr Crusoe Osagie said: “The governor has gone into self-isolation after the Governor of Bauchi State, Senator Bala Mohammed and Chief of Staff to the President, Abba Kyari, tested positive for Coronavirus.

He explained that although the governor was not showing any symptoms of the virus, “he has taken the necessary precaution to self-isolate to protect people that may otherwise come in contact with him”.

Edo State Deputy Governor, Philip Shaibu said Obaseki “avoided meeting with everybody, upon his arrival in Benin City from Abuja and he maintained social distance, before going into self-isolation.

Shaibu added that six persons had been isolated in the state  while samples of five of them had  been taken for test.

In Minna, the Chief Press Secretary to Governor Sani-Bello, Mrs. Mary Noel Berje, said her boss, decided to “embark on self-isolation considering the fact that as a public figure, he must have had contact with some confirmed contact cases of COVID-19 .

“Considering the fact that I(Sani-Bello)  was in Abuja the whole of last week to participate in the APC meeting with the President, the NGF  meeting, NEC   meeting and the World Bank breakfast meeting, as a way of leading by example, I have placed myself on isolation and waiting to be tested, along with members of my family.”

It was learnt that the governor had directed all his close aides and cabinet members to seclude themselves.

The Disease Control Unit of the Bauchi State Ministry of Health said it had directed   27 persons (mostly aides of Governor   Mohammed)  to self-isolate.

Twenty Osun State judges and 22   officials of Yobe State Government are currently on seclusion after returning from foreign trips.

Okauru urged all members of the NGF and the secretariat staff invited to the last meeting of the forum to also self-isolate.

Okauru said that his wife, a former Chairman of the Federal Inland Revenue Service (FIRS), Omoigui, and other members of his nucleus family, had also gone into self-isolation..

“I wish to inform the general public that my wife, together with my entire household, will be proceeding on self-isolation.

“We are taking this action following my exposure to His Excellency, Governor Bala Mohammed of Bauchi State who today (Tuesday) announced the positive outcome of his test for COVID-19.

“I attended different meetings of the Nigeria Governors’ Forum and the Nigerian Economic Council last week, which were also attended by the Bauchi State Governor.

“Consequently, my wife and I would be undergoing COVID-19 testing this week.

“All members of NGF secretariat that were exposed will also be observing self-isolation. We encourage all those who were invited to the NGF meetings for presentations to also do same.

“By our actions, we hope to encourage others who are exposed and not sure of their status to undergo self-isolation and make themselves available for the test, where applicable,” he said.

Osun State government said yesterday that 22 judges in the state are in isolation after they returned from the United Arab Emirates.

The Commissioner for Health, Dr. Rafiu Isamontu, said the judges returned to the state after  attending  an 11-day  international conference that ended March 20 .

He said: “The judges went into isolation immediately they arrived from the United Arab Emirates last weekend to ascertain their medical status.  They are in self-isolation and we are monitoring them.”

Also, 22 officials of the Yobe State Government that returned from Dubai last week have placed themselves on a 14-day self-isolation

Some of the returnees said they tested negative for the virus on their arrival from the oil-rich Emirate.

One of them said, “We were subjected to all the screening procedures both in  Dubai and at  the  Nnamdi Azikwe International Airport,  Abuja. The good thing is that none of us was positive for  the virus at  the time we were all tested.

“Naturally, the global protocol requires our self-isolation and we have to undergo that before we re-unite with our families and friends. This is exactly what we are doing. We have to do that to disabuse the mind of the people of the state. The truth is that none of us will like to put our families or any citizen of the state in danger.’’

The Acting Head of the state civil service, Mohammed Nura; the Permanent Secretary, Ministry of Basic Education and Secondary Education, Yakubu Doskshi and the Special Adviser on  Politics to Governor Mai Mala, Aji Yerima Bularafa,  confirmed that the returnees had gone into self-isolation.

Akeredolu, Sule: we’re not in isolation

Ondo State Governor Oluwarotimi Akeredolu and his Nasarawa State counterpart, Abdullahi Sule have denied reports that they were in self-isolation.

Akeredolu, who addressed reporters alongside Commissioner of Police Undie Adie said he would not have come out if he were on self-isolation.

The Director of Strategic Communication and Press Affairs to Nasarawa State  governor, Mr Yakubu ,  said, “If indeed Engineer Abdullahi  Sule goes into self -isolation, we shall make a formal statement to that effect.

Lamai urged the public to disregard reports  in some social media platforms insinuating that the governor had gone on self-isolation.