There was mild drama on Tuesday in the Senate over the management of over $3.8 billion fuel subsidy fund by the Nigeria National Petroleum Corporation (NNPC).

Senators were at each others throat following accusations and counter accusations of alleged compromise in their line of duty.

There was also allegation of subterranean plot to source campaign funds from the oil behemoth.

Olujimi (Ekiti South) told her colleagues that it was dangerous to allow just two people in NNPC, the Group Managing Director (GMD) and  the Executive Director in charge of Finance, as the sole controllers of huge subsidy fund.

The fund, she said, has been curiously renamed “Fuel Subsidy Under-Recovery Fund” for a purpose that has not been explained to Nigerians.

She recalled that NNPC has been severally requested to submit subsidy budget to the National Assembly for consideration and approval.

A request, the lawmaker said, has been resisted by the NNPC without reason.

She insisted that the Senate cannot sit by and allow only two people to continue to manage over $3 billion oil subsidy funds.

Olujimi who came under a point of order, reminded the upper chamber that attempts to compel NNPC leadership to do what is right by submitting a budget to the National Assembly on subsidy payment, has failed.

The amount involved, she reiterated, was “too huge for only two people to control and manage without appropriation.”

Olujimi said, “I need to bring this issue to the attention of the Senate. The NNPC is operating an illegal fund on subsidy. As a Senate, we are the true representatives of the people. We cannot sit back and allow this to continue to happen.

“I am bringing this to the attention of the Senate so that we can look at the issue. Let the various committees, especially the Senate Committee on Petroleum (Downstream), look into this issue. Let them investigate and tell us what the position on ground is.”

She prayed the Senate to mandate its committee on petroleum (downstream) to cause the NNPC to come before the senate to explain what has happened to the fund and the new terminology formulated to manage the fund.

Saraki asked Senate Leader, Ahmed Lawan and chairman, Petroleum Committee (downstream) Senator Kabiru Marafa to inter face with those involved and report back to the Senate within four days.

He said that “the issue is too serious and the money involved too huge to be left just like that.”

Saraki said: “When we passed the budget, I said the executive needed to bring subsidy budget. In the light of the enormity of this, we will direct the Leader and chairman of Downstream to summon those in charge. They need to get back to us in four days. I don’t want this issue to be partisan. I want us to speak on the basis of fact. I don’t want us to take up this issue and people will begin to see it as a partisan issue.”

Some Senators were however not comfortable with the inclusion of the committee on Petroleum as part of those to investigate the matter.

Senator Mohammed Ali Ndume suggested that since committee on Petroleum has oversight function over NNPC, it should be left out of the probe.

The Borno South Senator re-echoed what Senator Buka Abba Ibrahim murmured that the Petroleum Committee might have compromised on the issue.

Apparently for emphasis, Ndume said that his proposal that the Petroleum Committee should not be part of the investigation stemmed from the insinuation by Ibrahim that the Petroleum committee might have compromised in the course of its oversight duty.

Marafa felt injured by the comment that members of his committee might have been comprised by officials of the NNPC.

The Zamfara central lawmaker said that he would not be bothered if his committee was disbanded.

He said that it would not be out of place to say that those proposing the setting up of ad-hoc committee in place of a standing committee have other motives.

He did not stop there. Marafa said that those behind the proposal for ad-hoc committee were actually gunning to generate campaign funds ahead of the elections in 2019.

There was uproar on the floor. Many senators attempted to shout him down. He persisted.

Marafa said that Ndume must also asked to withdraw his statement that members of his committee have been compromised.

He said that Ndume must not only stop at withdrawing the statement but also tender an apology to them.

He said, “I feel insulted. f the Selection Committee agrees today to dissolve our committee, I will not have any problem with that. They have the right to do that. But for anyone to just accuse us that we have been compromised, I think it is an insult.

“I know that those advocating that an ad-hoc committee be set up to investigate the issue are out to generate campaign funds for their election next year. They are free to do so. I will not stop them. But no one should malign us and accuse us of compromise.”

He insisted that Ndume must first tender unreserved apology and withdraw his statement.

Sensing total break down of law and order in the chamber, Ndume told his colleagues that Buka Ibrahim had given him the authority to apogise and withdrew his statement.

Marafa followed and withdrew his statement. He also apologised to his colleagues for what many considered a sweeping statement.

The matter did not end there as the Senate Leader protested Marafa’s statement.

He declined to serve in the yet to be constituted committee.

Lawan said that he was declining his nomination to head the probe team to protect his integrity.

Although he did not mention Marafa, Lawan said that it took him several years to build his integrity and reputation and will not want anybody to soil his name.

Saraki and his deputy, Ike Ekweremadu, requested Lawan to reconsider his decision.

The Senate President said that the Senate cannot afford to handle the issue haphazardly.

He said that “the country cannot be running a subsidy fund of $3.8 billion without knowing who is doing what.” 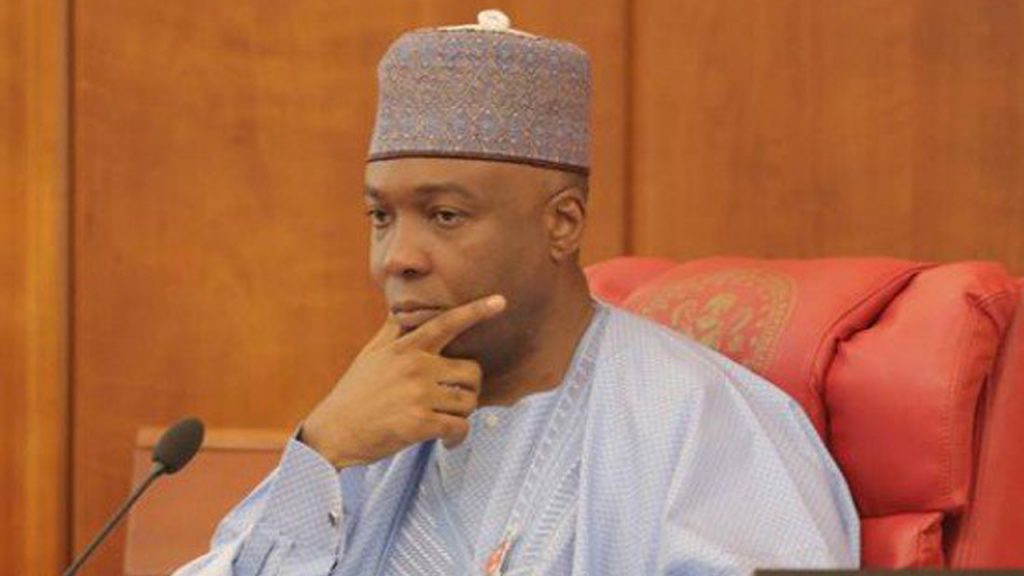