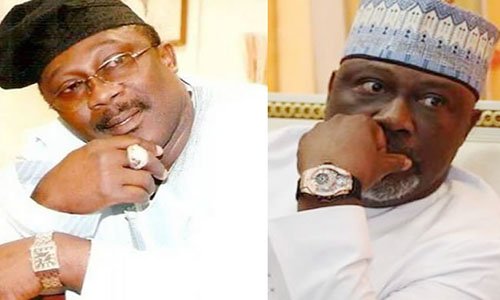 The Kogi State National Assembly Election Petition Tribunal has rejected a key witness called by Dino Melaye, who is challenging the outcome of last election in Kogi West Senatorial District.

Melaye, who was the candidate of the Peoples Democratic Party (PDP) in the election held on November 16, last year is querying its outcome.

The election was won by Smart Adeyemi, who was the candidate of the All Progressives Congress (APC).

During the hearing of the petition in Abuja, the tribunal, led by Justice Isa Sambo, disqualified the witness called by Melaye and the PDP, Mark Samuel on the grounds that his statement was not presented as required by law.

The tribunal upheld the argument by Adeyemi’s lawyer, Oladapo Otitoju, to the effect that the witness and his statement were not properly presented.

Otitoju had argued that Samuel’s written statement was not pleaded as additional witness statement in the petition.

He also argued that Samuel, who claimed to be a lawyer, failed to attach his seal, as a lawyer, to the statement.

Otitoju noted that the witness’ statement, sought to be adopted by Samuel, was filed on February 26, 2020, 21days after the period allowed under Section 285(5) of the Constitution.

He contended that allowing the statement will amount to the tribunal extending the days permitted by the Constitution for the filing of a post-election petition.

In the ruling, Justice Sambo agreed with Otitoju and proceeded to disqualify Samuel as a witness in the case.

Another witness, Tolu Segun, said he acted as the petitioners’ agent in Okekoko Ward, Kabba/Bunu LGA.

Segun told the tribunal that he voted at polling unit 009 after which he visited nine other polling units.

He said the results and other information he got from the polling units were given to him by the agents, and that they were later forwarded to the Local Government Chairman of the PDP.

A witness of the People Democratic Party, PDP, and its Candidate, Senator Dino Melaye, Philemon Enoch, had told the Kogi State Tribunal that there was no over-voting during the Kogi West Senatorial election in Kogi state.

Enoch, a carpenter and the party agent of the PDP in that election, in his evidence before the tribunal admitted that ballot boxes were not also snatched during election.

The petitioner, Dino Melaye, had called in some of his witnesses to butress his case at the tribunal challenging the outcome of the November 30, 2019 rerun election won by Senator Smart Adeyemi; alleging their was mayhem and manipulation at the poll.

But, some of the evidence from the petitioner’s witnesses, who are party agents are saying the contrary.

Another witness called by the petitioner, Ishaq AbdulRahaman, also a PDP agent admitted that voting, accreditation and counting of votes were peacefully done without intimidation and harassment.

For Gimba Timothy, a farmer, another party agent, who testified for for the petitioner said he could not remember the score of the PDP in that election in unit 008 where he acted as agent.

He also said the result sheet he signed, he did not take a look at it before signing.

When challenged by Senator Adeyemi’s lawyer, Dr. Dapo Otitoju, that he was never an agent of the party since he could not remember the score of his party at the election, he insisted that he was the agent.

Two day ago at the tribumal sitting, there was also a mild drama when some of the petitioner’s witnesses denied their statement on oath.

At the hearing of the petition, one of the witnesses who said his name is Magi Abraham Shade delt a blow to their case when he mentioned he was from Okedayo rather than Kakun that was in his written statement.

While being cross examined, Dr. Otitoju, demanded for the witness to sign his signature; but it was found different from the one appended on his written address.

The witness also made another gaffe when he stated that he was PDP Ward collation agent during the election, though he did his voters card registration in Kaduna and later transferred it to Kabba.

Counsel to the All Progressives Congress (APC), Barr. Abdulahi Esq, also queried the witness to identified himself from the voters register, but the picture of the person’s whom he claimed was entirely different from his person.

A petitioners’ witness also, told the tribunal hearing the petition in relation to the last election in Kogi West Senatorial district that he was absent when votes in his ward were counted and results announce.

The witness, Ibrahim Jimoh said he served, during the election, as a Collation Agent of the petitioners – the Peoples Democratic Party, PDP, and its candidate, Dino Melaye, in Ijumu Ward.

Jimoh, who had earlier adopted his written statement, said under cross-examination, that he was absent at the venue of the declaration of result after votes were counted.

He admitted relying on the result as announced by the Independent National Electoral Commission, INEC, after the election.

When asked by lawyer to Smart Adeyemi (All Progressives Congress’ candidate and winner of the election), Oladapo Otitoju, whether he witnessed the counting of votes in his ward, Jimoh said no.

On whether the ballot papers were counted in his presence, the witness said no, but that he relied on INEC report and what other agents told him.

When asked how he got the results of the election, Jimoh said, ”I was not there. I was not on ground. Yes, it was the second agent that came to tell me the figures.”

Jimoh equally admitted that the election went on peaceful and was without violence.

Another petitioners’ witness, Ademola Samuel, who claimed to be a farmer, adopted his written witness statement upon mounting the witness stand. On being cross-examined by Otitoju, Samuel told the tribunal that he examined the results after the election.

When asked to dwell more on his analysis of the examination of the election results, the witness said he acted based on what he was told.

On the 20th April, 2020, the candidate of the People’s Democratic Party (PDP) in the November 16, 2019 Kogi-West senatorial election, Senator Dino Melaye, told the Kogi State National Assembly Election Petition Tribunal that he was in all the 564 polling units on the election day.

Testifying before the Justice Isa Sambo-led tribunal, Malaye is challenging the out come of the election that was won by Smart Adeyemi of the All Progressives Congress (APC).

When asked by counsel to Adeyemi, Dr. Oladapo Otitoju, if he was aware of the testimonies his agents had given before the tribunal, Melaye said his agents cannot speak for him just as he cannot also speak for them.

When asked where he got the information about irregulaties in the election he presented to the tribunal, he said: ”I was everywhere on the election day in the 564 units.”

When asked which polling unit he voted and what was the result of the election, he told the tribunal that he could no longer remember adding that he was not aware that result was recorded in his polling unit.

He was later confronted with the form EC8-D1 containing the result of the polling unit and was asked to read it but he claimed he could not see it clearly because his glasses got broken when the tribunal went on a short break.

Also at the tribunal, a witness, Mark Samuel, a lawyer could not give evidence before the tribunal because his statement was not pleaded as additional witness in the petition.

Apart from that, Samuel, a lawyer failed to attach his seal as a lawyer to the statement.

The respondent’s counsel objected to his being allowed to give evidence as a witness in the petition.

At the last adjourned date, a witness, Ibrahim Jimoh, Ijumu Ward Collation agent, said he was not at the venue of the declaration of result after votes were counted.

He said he relied on the report of the Independent National Electoral Commission, INEC, after the election.

But according to electoral laws, party agents must be available when results are counted before its is declared.

Jimoh told the Justice Isa Sambo-led tribunal sitting at the Fderal High Court in Abuja, that that he was not available when reault s were counted but relied on INEC report.

When asked by Dr. Otitoju, if the ballot papers were counted in his presence, he said no, adding that he relied on INEC report and what other agents told him

According to him, election went on peacefully without violence.

When asked how he got to the result he said: ”I was not there. I was not on ground. Yes, It was the second agent that came to tell me the figure”.

Another witness, Ademola Samuel, a farmer, after adopting his statement on oath as evidence before the tribunal also said the election was without violence.

Samuel told the tribunal that he examined the results after the election but when asked to shed more light on his analysis of the examination of the results, he said he acted on what he was told.