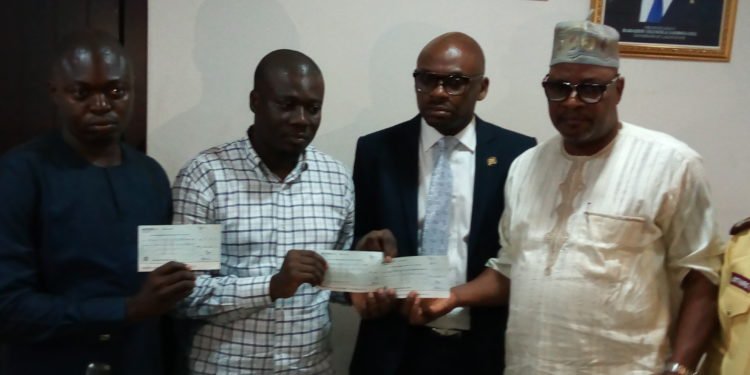 The Lagos State government on Tuesday presented a N10 million cheque to the relations of a Lagos State Traffic Management Authority (LASTMA) official, Folashade Arogundade, who was killed by a truck on May 25.

Presenting the cheque to the husband, Mr Tunde Babajide and her junior brother, Mr Ayokunle Arogundade, the Special Adviser to the Governor Mr Oluwatoyin Fayinka, said the donation was in fulfillment of the promises of Governor Babajide Sanwo-Olu when he paid a condolence visit to the deceased’s family.

He said though the state and especially the LASTMA missed the services of the late officer, who was highly regarded by her colleagues, the gift was to show the governor’s commitment to the welfare of all members of the civil service.

He urged the beneficiaries to make good use of the money.

Fayinka said in his commitment to ensure that the 18- month- old child left behind by the deceased is taken care of, a cheque of N5 million was written specially for the education of the child.

He asked that the cheque be deposited in an account to be jointly managed by the husband and a blood relation of the deceased.

A cheque of N3 million was also handed over to the deceased’s relation while a N2 million cheque was also given to the husband.

Permanent Secretary Ministry of Transportation Mr Olawale Maroof Musa said the death of the LASTMA official was regrettable, adding that as part of his commitment the welfare of all workers Governor Babajide Sanwo-Olu had led a high powered delegation to the family of the deceased to commiserate with them.

Responding, the widow Mr Tunde Babajide thanked the state governor for his magnanimity and LASTMA for the uncommon privilege his family has enjoyed.

He prayed God to continue to guide the state and the governor aright in the task of bequeathing a safe and prosperous state.

The deceased junior brother, Kunle Arogundade thanked the Governor for remembering the family in their period of grief and prayed such unfortunate incident would not be recorded in the traffic agency again.