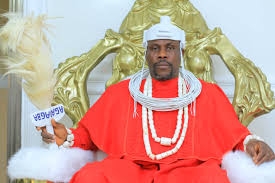 The Oba of Benin, His Royal Majesty, Oba Ewuare II has commended the National Association of Nigerian Nurses and Midwives for extending their free medical outreach to the Palace.

The commendation was given when the Chairman of the National Association of Nigerian Nurses and Midwives, Federal Health Institution Sector, Mr. Wale Olatunde led other members of the association on a courtesy visit to the Oba of Benin.

Oba Ewuare II described the nursing profession as very noble and important in the life of mankind and urged them to always be patient with the sick in their hospitals.

The Benin Monarch said the Palace will still continue to work on security in order to stamp out all forms of criminality such as kidnapping, so that nurses can practice their profession without fear.

The Chairman of National Association of Nigerian Nurses and Midwives, Federal Health Institution Sector, Mr. Wale Olatunde told His Royal Majesty that they are in Benin City for their annual conference, and consider it very important  to visit the Oba of Benin to solicit for Royal blessings.

He expressed gratitude to Omo N’Oba for the support accorded members of the association, especially during their trying moments.

Mr. Olatunde commended His Royal Majesty for the reforms introduced in the land acquisition system and development as well as in the area of conflicts resolution, which he said has brought peace and tranquility to the kingdom.