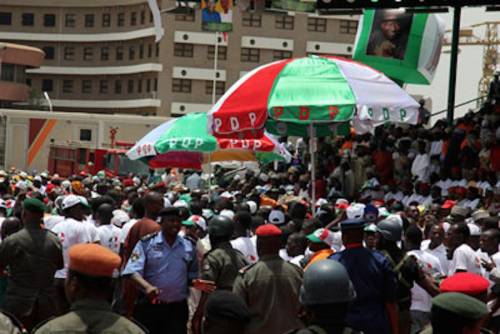 Ahead of Saturday’s general elections, the Peoples Democratic Party, PDP, Ife zone, Osun State has accused the former deputy governor of the State, Senator Iyiola Omisore of allegedly intimidating its members and supporters in Ile-Ife and its environs. In a statement by the chairman of the party in Ife zone and Modakeke, Prince Adedotun Adebowale and Mr. Dele Onigbinde in Osogbo, the party described the development as anti democratic and capable of instigating violence in the ancient city of Ile-Ife and Modakeke. The statement reads: “We were reliably informed that Senator Omisore on the 3rd of February, 2019 at Ogbon-Oya, Ile-Ife, his lineage compound while addressing a gathering of people directed that anybody found casting vote for the PDP and its House of Representatives candidate, Taofeek Abimbola Ajilesoro in the forthcoming general elections should get his or her wrist severed from the rest of the hand.” But the spokesperson of the Social Democratic Party, SDP, in Osun State, Mr. Taiwo Akeju, in his reaction to the allegation, described the accusation against Omisore as a pack of lies, saying the PDP was being hunted by fear of massively losing the coming elections. Akeju said: “Their accusation amounted to blatant lie. Senator Omisore and our party, the SDP are noted for peace.” Throughout our campaigns for the governorship election, there was peace and there was no record of fracas or violence. They (PDP) are carrying their fear of losing the election too far.”“This could not be treated as mere political boast going by the antecedents and violent propensities of some individuals hiding under the cover of politics to unleash terror on members of the public. Democracy is all about making choice in a congenial peaceful atmosphere. Any drift from this acceptable standard will precipitate disorderliness and disruption of peace in Ifeland.” “We want to put it on record that no amount of threat by Senator Omisore and his cronies can intimidate our people and subvert the will of the people as far as the coming election is concerned.”