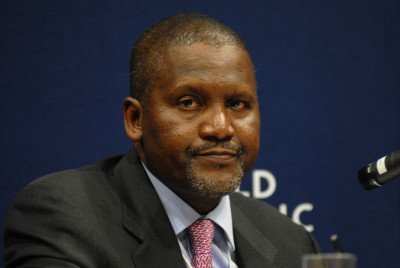 Farmers in Ogun state have said that they are eagerly awaiting the commencement of operations of the Dangote Fertiliser plant which is expected to roll out its first bag anytime from now.
The farmers made this known during an interaction with the Dangote Fertiliser team at the on-going 10th Gateway International Trade Fair holding in Abeokuta.
Secretary of All Farmers Association of Nigeria (AFAN), Ogun State Chapter, Prince Abiodun Ogunjimi explained that the farmers have heard a lot about Dangote Fertiliser and that given the uniqueness of Dangote products, they are waiting patiently to see the fertiliser in the market.
They said they welcome the impending arrival of the fertiliser saying the more the merrier and that the arrival of Dangote fertiliser would ease the pressure on the farmers brought about by the price of the products from the existing manufacturers.
According to him, the expectations of the farmers are high and that they expect that Dangote Fertiliser would have special packages for the farmers to encourage them to patronize the products.
“We are anxiously waiting for the Dangote fertiliser to come to the market. We have heard so much about Dangote fertiliser and with the uniqueness of Dangote products in other sectors, we are of the believe that the fertiliser would not be an exception.
‘We heard he already mapped out various strategies to roll out in grand style and that he would carry us the farmers along by giving us training as to how to apply the product appropriately to maximize yield and productivity and give farmers more profit for their produce.”
The head of the fertiliser team to the Trade Fair, Miss Mary Uche had assured the farmers that Dangote fertiliser has packaged a programme of activities for them that would be unveiled at the start of roll out of fertiliser from its plant at Ibeju Lekki in Lagos and that the farmers being critical stakeholders in the fertiliser value chain, would form the bedrock of operation of the Dangote Fertiliser.
She thanked the farmers for being enthusiasm shown towards imminent roll out of Dangote fertiliser and that they would not be disappointed but rather would be treated to a big deal that they have never witnessed before.
Miss Uche said the farmers would be given training on the rigjt uses of fertiliser and appropriate application of Dangote fertiliser for maximum yield and profitability.
“We have a lot of things in stock for you. Just we have been dping for our distributors in cement and other products, we will place you above every other consideration because your success is our success. We are mindful of the fact that government is shifting all focus to agriculture and this is the reason your role is very crucial in this direction.
Earlier during the Dangote Group Special Day at the trade fair, Mr. Adeyemi Fajobi, National Sales Director, Dangote Cement Plc had said that Dangote group is actively involved in the efforts at diversifying the nation’s economy with agriculture occupying a very important place.
He said the Group has been a regular sponsor of the Gateway trade fair by Ogun State Chamber of Commerce Industries, Mines & Agriculture (OGUNCCIMA) as a means of demonstrating its belief that the Chamber occupies a unique position in driving economic development through their activities.
According to him, “Ogun state has one of the largest concentration of industries in Nigeria and serve as a corridor for transportation of goods, services and people between the nation’s commercial center of Lagos and the rest of Nigeria and even our neighbouring countries of Benin Republic, Togo and Ghana.
“Gateway International Trade Fair therefore remains an avenue for us to connect with our customers in South West and other parts of the country. It is a home coming as the region is known for their innovation and industry. We at Dangote Group and people of South West share the trait of ever pushing beyond the limits and discovering new levels of success.
“Despite our progressive position, we are innovative and always thinking of strategies that will drive business and create value for our customers. Our continuous efforts to innovate, create value and invest in Nigeria are borne out of our firm belief in the vast economic potential of Nigeria.
“This has also informed our desire to invest massively in some states across the country. Our target is to ensure that Nigeria becomes self-sufficient in all the sectors where we play, cement, agriculture, mining and petroleum etc. As announced by our Group President, the Dangote Fertilizer will commence operations very soon with preparation having reached an advanced stage.
President of OGUNCCIMA, Alhaji Wasiu Olaleye commended the Group for being a leading light in the efforts at diversifying the nation’s economy from being an import dependent to export one pointing that should Nigeria be blessed with two Dangotes, most of Nigeria’s problem would have been solved.
He described the company as a big brother to OGUNCCIMA, pointing out that the Chamber was lucky to be a host to one of the Dangote Group’s massive investments in Cement in Ibese, Ogun state.