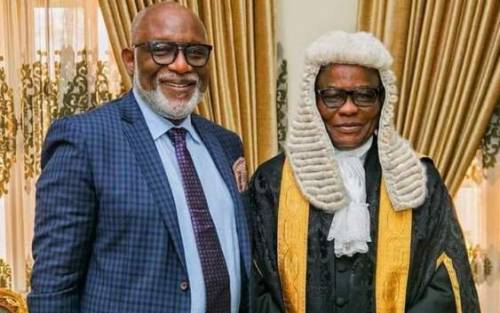 Facts have emerged on the real reason Ondo governor, Rotimi Akeredolu, sacked Attorney-General and Commissioner for Justice in the state, Mr Adekola Olawoye.

The sack of the commissioner was announced on Monday through a statement by the Chief Press Secretary of the governor, Segun Ajiboye.

Titiloye, a human rights lawyer, has since been announced as Olawoye’s replacement.

Despite being from the same town of Owo, we gathered that things began to fall apart between the two men after Olawoye started rejecting some obscene demands from the state governor.

A top government source, who confirmed this disclosed that the duo had been at loggerheads for over six months over legal issues.

Remember  the suspension of some lawmakers in the state’s House of Assembly further deepened the division between Olawoye and Akeredolu.

“The sacked Attorney-General is a man who has integrity and conscience. He does not abhor illegality at all because he is highly principled and knows the implication of any illegality that has to do with the law.

“You remember how the crisis in the state House of Assembly started. The AG had been advising that the suspended lawmakers be reinstated because they have a constituency they are representing but the governor refused this despite the court judgment ordering their reinstatement.

“But the last straw that broke the camel’s back is that the governor wanted Olawoye to make his sister-in-law, one Prof Alero, a judge in the state’s high court.

“He wanted the sister-in-law to fill a vacant position of Justice Dele Olupitan, who died recently in the state’s high court.

“The woman by birth is from Delta State and already we have more qualified Ondo State indigenes to fill this slot but Akeredolu is refusing and wants his sister-in-law.

“She is purely an academician and has been in the academics for over 20 years. She has not seen the four walls of the court nor had a history of a case to herself in any court.

“I’m aware that recommendations have been made to the National Judicial Council and they have picked an indigene of the state with good credentials but the governor is refusing that he only wants his sister in-law.

“The governor even said he won’t inaugurate anyone than his own choice which is Prof Alero.

“The governor sees the AG as someone who is not doing his bidding and it is the main reason why he booted him out of that office.

“Even, the Chief Judge (Mrs Oluwatoyin Akeredolu), is not in good terms with the governor because the woman has been trying to avoid him because she knows Akeredolu likes perpetrating illegality.

“I know the sledgehammer would still come on her too because she too doesn’t take nonsense or accede to illegality,” the source said.

When our reporters contacted Mr Olawoye over his sack, he said he was yet to receive any official letter to that effect but promised to react soon.