THE MENTION OF THE NAME, PERE OF OLODIAMA CLAN, EVOKES UGLY MEMORIES 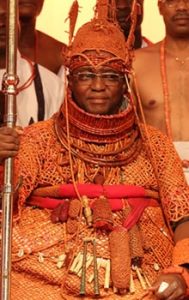 In 1986, one Timothy Ofunama, issued a statement saying that Gelegele belonged to Ijaw and that the Oba of Benin had no jurisdiction over it in the welcome address I presented when Omo N’Oba Ewuare II visited Obazuwa on January 28, I enumerated some of the provocative acts of the Ijaws. We wish to state some of them here again.

In 1985, Philips Oil Company established business in Ughoton. It built a Flow Station in Gelegele. Ijaw fishermen, who lived in stilt-houses around the swamps, came out and began to supply labour to the company. Many of the Benin youths in Ughoton and Gelegele had left the villages in search of a better life in the City. When they heard of the new company and the job opportunities if offered, they returned home to seek employment. The Ijaws were not happy at their return. They feared they would displace them (the Ijaws) in competition for jobs. Suddenly, they attacked the returnees. The attack was so violent and widespread that the government setup an administrative panel, headed by Mr. S. Jamgbadi, a Senior District Officer, to look into it. Part of the panel’s report reads:

The Ijaws were not done yet with agitation. They agitated again, the same year, against Philips Company itself. The cause of the agitation was that the company also gave employment to non-Iyaw persons. Government again set up an inquiry to look into the crisis. Part of the panel’s report reads:

On Thursday, November 20, 1986, as said earlier, Timothy Ofunama, in the publication in the Nigerian Observer said that Gelegele belonged to Ijaw and that the Oba of Benin had no jurisdiction over it. The government reacted to the publication through a press statement issued by the Honourable Commissioner for Local Government, Engr. Enoch Ejofodomi. I reproduce the statement here in full.

1.     My attention has been drawn to a publication at page 4 of the Nigerian Observer Newspaper of Thursday, 20th November, 1986 titled “Public Notice” and credited to one Timothy Ofunama who styled himself as the “Ama-Okosuwei of Gelegele”. In which he gave the impression that the traditional administration of Gelegele was under the “Pere of Olodiama Clan” and other Ijaw Chiefs in Ovia Local Government Area of Bendel State.

4.     In the light of the foregoing, Government sews the action of Timothy Ofunama who calls himself the “Ama-Okosuwei of Gelegele” as an attempt to incite the law abiding Ijaw citizens in Gelegele against their host as capable of causing serious disaffection among the entire community in that part of Ovia Local Government Area. I want to stress that Government will not tolerate that state of affairs which is capable of jeopardizing the peace, order and good government in the area.

5.     For the purpose of clarification, it is considered necessary to inform the general public that it is not only contemptuous to reopen an issue on which the Supreme Court had already delivered judgment but that it is also unlawful for anyone to call himself a chief or allow himself to be so called or addressed if he has not been conferred with a chieftaincy title by a competent authority and has not been registered by the Ministry of Local Government as a Chief.

6.     Finally, I want to warn that all those who are party to the aforementioned publication should desist forthwith from parading themselves either as traditional rulers or as traditional chiefs as the penalty for their actions under Sections 20 and 26 of the Traditional Rulers and Chiefs Law, 1979 is imprisonment for six months and two years respectively without an option of a fine.

The Ijaws still claim ownership of Gelegele. Yet, the question of who owns Gelegele had gone through litigation and had long been settled.

At the High Court of Justice, Benin, in suit B/44/1970, Judgment was delivered in favour of Benins by Honourable Justice Ekeruche on December 22, 1978. Part of the judgment reacts.

“…finally, I enter judgment in this case as follows: for the avoidance of all doubts, argument or controversy, I hear say unequivocally, that Gelegele village and its environs and bushes are Benin land. They do not belong to the Ijaws of Gelegele as owners. The Ijaws are tenants of His Highness Akenzua II the Oba of Benin. Apart from above, the plaintiffs’ claims are dismissed in their entirety”.

Dissatisfied with the judgment, the Ijaws went to the Court of Appeal, Benin. The court dismissed their appeal and delivered judgment in favour of Benin. The lead judgment was read by Honourable Justice Abdul Ganiyu Agbaje on December 16, 1981.

Still on satisfied, they headed for the Supreme Court. In Suit SC. 131/1/1982, Honourable Justice, Muhamadu Lawani Uwais (CJN) and four (4) others, on August 19, 1983 also dismisses their appeal and up-held the judgment of the lower courts. The CJN concluded thus:

“… For three reasons I am of the opinion that the appellants’ argument in support of the sole ground of appeal should be discountenanced. The appeal therefore fails and it is dismissed with N300.00 costs to the respondents. The decision of the Federal Court of Appeal is affirmed…”

The Supreme Court awarded costs against the Ijaws. Despite these judgments, the various reports and government statements, the Ijaws still claim ownership of Gelegele!

In 1987, they attacked Benin indigenes in Iko and Isekiri and Urhobo settlers there. They destroyed the Ogua-edion in Iko, they moved up-hill, to Ikonoke and unleashed mayhem. Benin indigenes in Ikonoke and in Ikonugboghodo fled, giving room to the Ijaws to entrench themselves in both places. At that time and up till the early 90s, one Pa Igbinosun, a Benin man, was the Odionwere of Iko, they have forayed into Agbomoba, Ozomu, Igbobi, Ekete, Ite, Orogo, Ewudu, Abiala, Eki-ohuan (now known as Ekewan), Okomu and Gelegele. They maim the Benin people in these communities and destroy their properties.

In June 2011, we, offered a parcel of land to Edo State government for the erection of a model school block. The Government sent a team led by the Permanent Secretary, Ministry of Education, then Mrs. Idaho is now the Head of Service. In anticipation of the inspection, we directed Obazuwa boys to demarcate the plot. As the boys were measuring it, Ijaws militants descended on them with machetes, guns, and clubs. Without any provocation, they brutalized the boys and abducted two of them. Obazuwa boys were unnamed and defenseless.

We sent an S.O.S to the Governor who directed his Chief of Staff, then Barr. Osarodion Ogie, to take up the matter with the Commissioner of Police. The Police Commissioner promptly dispatched a team of policemen from Evbotubu Police Station to rescue the abducted boys. He sent another team from SARS to arrest the militants who brutalized the boys, destroyed their motorcycles and a car. Those arrested were charged to Okada Magistrate’s Court where the case is still pending up till now.

In order to strengthen their claim of ownership of Gelegele, they have now coined names, Gelegelegbene and Gelegele-ama. These names are new. In all their previous write-ups and the dispatches by early European visitors. Gelegele had always been known and spelt as Gelegele. The use of Gelegelegbene and Gelegele-ama which they have only recently coined is ludicrous and intellectually dishonest.

Our people got judgment in the Supreme Court 34 years ago. Now they want to claim their judgment right. Those who were driven away from their homeland, Abiala, and Ikon’oke, want to return home. They want to erect a house in Gelegele for the Okao of Gelegele who was installed there by the Oba of Benin.

The Edo State Ijaws are bellicose, belligerent, militant, quarrelsome and unfriendly. They are fighting the Itsekiris in Warri; they are fighting the Urhobos, the Ibibios and the Ilajes. They are claiming land whereas they traditionally live in swamps along the coastal areas in houses they build on stilts.

The so-called Beni-Ebe, Toru-Ebe Kengama and Abadi States which they requested the Senate to create for them in 2009, traverses the whole of the Nigerian coastline, encroaching of Benin, Ibibio, Ilaje and Itsekiri territories.

We plead for your support in curbing the Ijaw aggressiveness and in enforcing the Supreme Court Judgment for which the Ijaws have rudely insulted the highest court in the Country, Honourable Justice, and the Chief Justice of Nigeria whom they contemptuously described as fraudulent.

This press statement was endorsed by HRH Prince Edun Akenzua, MFR, FNGE, Ogie-Obazuwa and six other Enigie for on behalf of 48 communities in the affected areas in the Benin Kingdom.