Update : Judicial Panel, I was forced to remove my bra, says 27-year-old who filmed policemen shooting at #EndSARS protesters 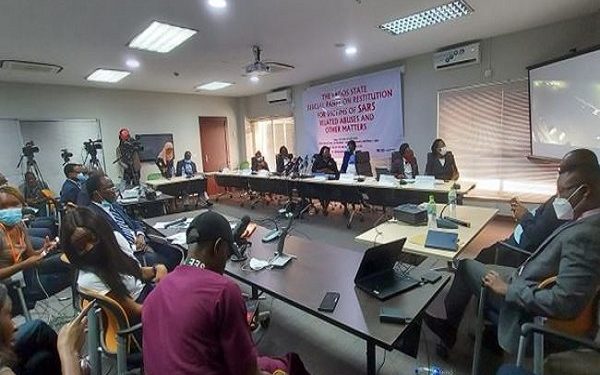 Twenty-seven-year-old Felicia Nkemakolam Okpara, one of the ladies who were seen in a video that went viral being dragged into Barracks Police Station, on Friday narrated her ordeal before the Lagos State Judicial Panel of Enquiry and Restitution for Victims of Special Anti-Robbery Squad (SARS) Related Abuses and other Matters.

Led by her lawyer, Ridwan Oke, she testified that she was beaten and made to remove her bra in their presence.

The petitioner, who said she is an orphan, told the panel that several policemen and police women beat her after she was caught trying to stream policemen from Area C, Barracks Police Station shooting into the midst of #EndSARS protesters on her twitter  handle.

Okpara said: “After taking off my bra, one policeman went inside and brought a broken mop stick and used it on a man that was also arrested.

“After beating him, he went out and came back with the same anger and started hitting me with the nozzle of a gun.

“I was scared that he could pull the trigger. I think he realised what he was doing and then stopped and started using the gun butt to beat me.”

She said the police took her money, damaged her phone and threatened to detain her at Panti, Kirikiri and Abuja.

She said the police did not allow her and the other lady that was arrested to make a call to anybody.

Okpara said when a police officer came to take her statement, she discovered that he was an Igbo man, so she spoke Igbo to him to see if he could be of help, but he asked her to calm down.

She said: “They took us upstairs and brought us back. That was where I saw Desmond Elliot. There were so many lawyers around.

“Later, Desmond said where are the two ladies whose video was trending on social media? That was when I knew he came for me.”

The mother of one said that Desmond Elliot gave her N6000 to go home around 10pm, after she was released.

“I was smelling, in fact stinking. I was traumatized. There was no vehicle, no cab,” she  lamented.

Okpara said she was nearly raped when she approached a man to help him get transport to Ikorodu.

Seeing her condition, the man invited her to come and sleep inside the bus with him.

She said she later slept in a hotel in the area that night  and went for medication when she got to Ikorodu the next day.

Justice Doris Okuwobi admitted in evidence the photographs of her bruised body and face, medical report and damaged phone.

She adjourned the matter till December 4 for continuation of hearing.