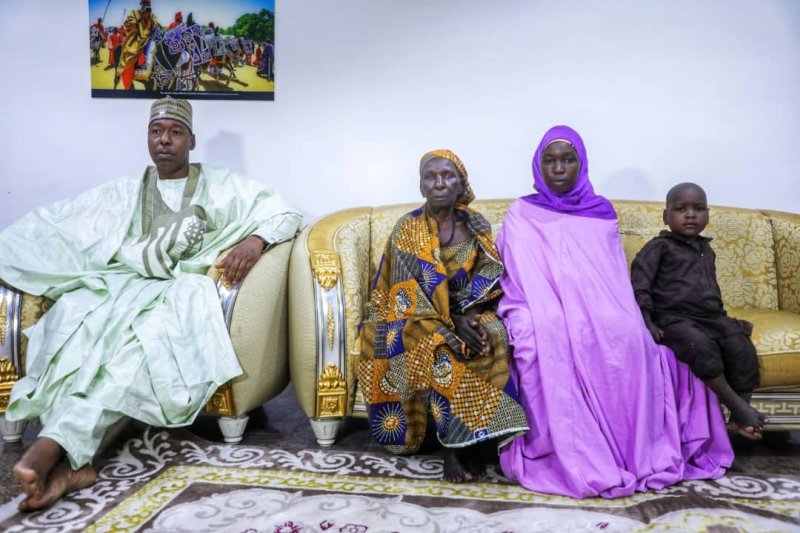 Borno State Governor, Babagana Umara Zulum today received Ruth Ngladar Pogu, one of the over 200 schoolgirls abducted seven years ago at a Government Secondary School in Chibok. Boko Haram had attacked the school towards midnight on April 14, 2014, and abducted the girls.

Ruth, alongside, the husband she married captivity, surrendered themselves to the Nigerian military on July 28, 2021, at a location in Bama.  Under Zulum’s supervision, security and government officials kept the development secret and used the last 10 days to contact her parents and the association of parents of the missing schoolgirls in order to ascertain her identity.

Zulum’s spokesman, Malam Isa Gusau, said the governor received the Chibok girl at the Government House in the presence of overwhelmed parents who reunited with her.

An excited Governor Zulum said reuniting with Ruth was a boost to keeping the hopes of parents, other family members and Borno State government alive in the optimism that all others, still in captivity, will be safely found and in good health.

Zulum said the government, in collaboration with Ruth and her parents, will undertake a rehabilitation and reintegration programme that will focus on her health, psychosocial wellbeing and her chosen path to a productive future, all of which will be determined by her.

The Governor commiserated with families of those still in captivity and urged them to remain optimistic prayerful and cooperative with security agencies should they be required for any measure.

“I am extremely excited both as Borno’s Governor and father of all sons and daughters of the state, and also as a father to daughters. I know the feeling of families of those still under captivity but we have to remain hopeful especially with today’s development”

Chairman of the Chibok Girls Movement, an association of all affected parents, Yakubu Keki, expressed joy over the return of Ruth Nglari Apagu. He said, the people of Chibok appreciate the efforts of security establishments and the concern and support regularly shown by Governor Zulum on the plight of parents whose daughters are still missing.