Yahaya’s Appointment as COAS, 30 Majors-General who are his Senior may be Forced Out of Service 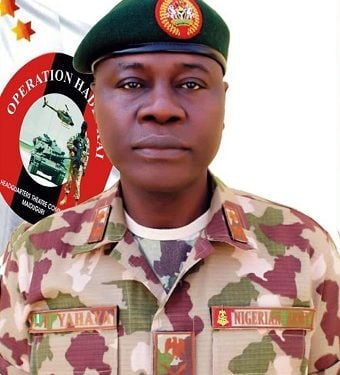 Maj.-Gen. Farouk Yahaya, new Chief of Army Staff appointed by the Commander-in-Chief of the Armed Forces of the Federal Republic of Nigeria, President Mohammadu Buhari, in Abuja on Thursday.

Six days after the death of Chief of Army Staff (COAS)Ibrahim Attahiru in a  plane crash, Maj.-Gen. Farouk Yahaya has been named his successor.

The statement reads: “The Commander in Chief of the Armed Forces of the Federal Republic of Nigeria,  President  Mohammadu Buhari, has appointed Maj.-Gen. Farouk Yahaya as the new Chief of Army Staff.

“Prior to his appointment, Maj.-Gen. Yahaya was the general officer commanding 1 Division of the Nigerian Army and the incumbent Theatre Commander of the Counter terrorism, Counter Insurgency military outfit in the Northeast code-named  Operation Hadin Kai.”

With his appointment, some  majors-general who are his senior may be forced out of service. The  senior senior generals are members of Regular Course 35, 36 and 37. Although Farouk belongs to 37 Regular Course, he is a step  junior to his Nigerian Defence Academy (NDA) coursemates.

Yahaya was born January 5, 1966 in Sifawa, Bodinga Local Government Area of Sokoto State. He started his cadet training September 27, 1985, and was commissioned into the Nigerian Army Infantry Corps September 22, 1990.

He has held several appointments, including Staff, Instructional and Command.

A reliable military source, who spoke to our correspondence on the implications of Yahaya’s appointment, said the Maj.-Generals who are Yahaya’s senior might  be asked to turn in their papers for ease of administration or posted out to head tri-service institutions.

He said: “There is going to be a serious shakeup especially in the Army, with the appointment of the new COAS. The Military Council may ask members of Course 35, 36 and 37  to quit  or they can also be redeployed to head tri-service institutions. But most of them will certainly go.”

The late   Attahiru who died with 10 other military personnel May 21 when a Nigerian Air Force aircraft flying them to Kaduna crashed was of Course 35.

A military chief had earlier advised the President against going below Course 35 in picking Attahiru’s replacement for fear of unsettling the Army and setting the campaign against insurgents and bandits back.

Our correspondence however, gathered that Buhari’s  decision may not be unconnected with  the need to flush out old hands in the service to pave way for younger officers who can reinvigorate the counter-insurgency war.

Some junior officers    welcomed the President’s decision to choose the new COAS from Course 37.

They said that the flushing out of the very senior officers would brighten their chances of getting command positions.

The ruling All Progressives Congress (APC) has however set an agenda for Yahaya.

The APC asked him to, among others, ensure inter-agency collaboration in tackling the lingering security challenges in the country and consolidate the successes so far recorded by the military.

The party’s advice was contained in a statement by the Secretary of its   Caretaker Extra-Ordinary Convention Planning Committee (CECPC), Senator John James Akpanduoehehe.

The statement partly reads: “We urge the new Chief of Army Staff to consolidate on the successes recorded by the military in tackling all security threats in the country.

“This could be achieved and deepened sustainably through increased collaboration among the security services and communities. More vigilance and increased cooperation and support through sharing information can pave way for faster mopping up the remnants of the insurgents and ending banditry and kidnapping in parts of the country.”

He said in a statement by his Special Adviser Media and Communication, Muyiwa Adekeye, that he was “looking forward to working with the newly appointed COAS to advance peace and security in Kaduna State.”

But Human Rights Writers Association of Nigeria (HURIWA) said that it was no longer surprised “by the President’s predilection for appointing only Northern moslems into strategic national defence portfolios.”

HURIWA said “these serial abuses of the Constitution by President Buhari would have merited his impeachment from office” if the country had “strong and independent persons as heads of the National legislative chambers.”

“Buhari’s refusal to appoint an officer from the Southeast  as the Army Chief of Staff even when he is the most senior of the Majors- General further solidifies his notoriety as someone who does not believe in one Nigeria,” the group added in a statement by its National Coordinator   Emmanuel Onwbiko.