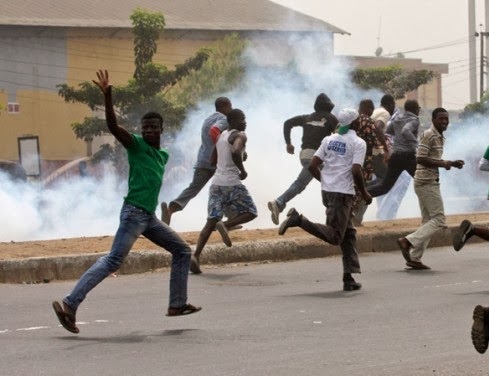 Scores of hoodlums swooped on the seedy Lafenwa market on Tuesday afternoon and disrupted the distribution of the Federal Government’s Enterprise and Empowerment Programme (GEEP) popularly called ‘TraderMoni,’ forcing distributors and beneficiaries to flee in different directions for safety.

They whisked away the Iyaloja and Babaloja of Lafenwa market to an unknown location.

The hoodlums, numbering over 50, T here not deterred by the fact that the Lafenwa Divisional Police Headquarters situates directly beside the market but proceeded to attack the handlers of the GEEP ‘TraderMoni’ who had arrived the market to document and verify the traders’ data with any valid means of identification such as Permanent Voter Card(PVC).

Many of the prospective beneficiaries, who were yet to get their bio-data captured before the hoodlums struck and disrupted the exercise, alleged a key member of the Abeokuta North West Local Council Development Area (LCDA) led the hoodlums to the venue and sacked everybody before abducting the Babaloja and Iyaloja.

However, will learnt the Iyaloja of Lafenwa market regained freedom hours later and returned to the market.

However, the Chairman of Abeokuta North West LCDA, Monsuru Shorunke when contacted, told reporters that he was the one that led some “boys” to Lafenwa when they heard that some politicians “were giving the traders money in exchange with their PVCs.”

He said: “We heard that some people came to Lafenwa market, collecting people’s PVCs from the traders with their names and PVCs numbers.

“And governor said we should go out and find out: it was Governor Amosun that sent us.

“I was in front of the governor when we heard the information. So, I collected Iyaloja’s phone number from Hon. Akintona. We took Iyaloja to the governor’s house along with Babaloja of Lafenwa.

“We believe it was wrong for them to come and collect people’s PVCs with numbers before Election Day. That was what they came to do at Lafenwa.

“My message is that we should be vigilant. Not only the electorates but all the politicians in Ogun state. We must be vigilante.

“These people are ready to confuse our programme by giving them money.

They want to give them money because of the coming election and it is wrong. No, that is wrong because, that information is not right.“