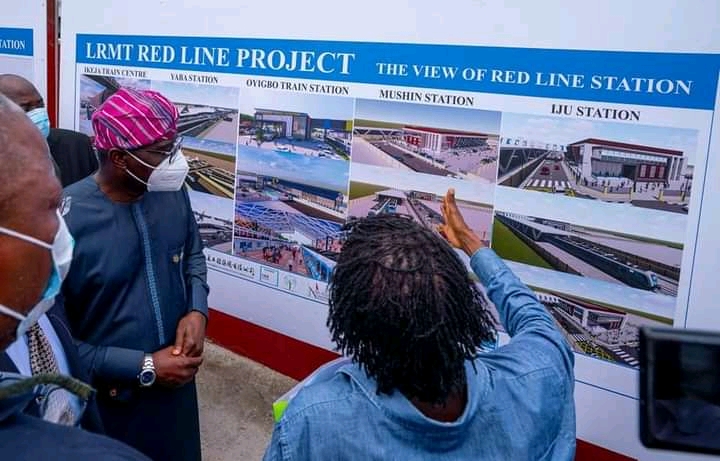 Lagos State Government has commenced another journey towards improving mobility across the metropolis. Governor Babajide Sanwo-Olu, on Thursday, flagged off the construction of Red Line of the Lagos Rail Mass Transit (LRMT) project, which starts from Agbado and terminates at Marina.

The 37-kilometre-long rail corridor will be constructed in three phases, with the first phase of the project (Agbado-Iddo) to be completed in 24 months, spanning 28 kilometres and sharing track with the existing Lagos-Ibadan rail infrastructure built by the Federal Government.

The ground-breaking ceremony was held at the proposed site for the Ikeja Train Station. It was witnessed by Minister for Transportation, Hon. Chibuike Amaechi, represented by the Director General of the Nigerian Maritime Administration and Safety Agency (NIMASA), Dr. Bashir Jamoh.

When it becomes fully operational in the last quarter of 2022, the Red Line, being constructed by Lagos Metropolitan Area Transport Authority (LAMATA), will have the capacity to transport about 500,000 passengers daily.

In the course of the rail project, the State Government will be building eight train stations along the rail corridor, starting from Agbado to Oyingbo.

The Red Line is to raise mass transportation capacity in the State, complementing the Blue Line that extends from Okokomaiko to Marina. The Blue Line is currently at 78 per cent completion.

Besides, Governor Sanwo-Olu, at the event, started payment of compensation to all property owners affected along the Red Line’s right-of-way.

Sanwo-Olu said the project was another initiative of his administration to deliver enduring infrastructure for the State’s transport system and make Lagos a competitive mega city.

He said traffic management and transportation pillar in his Government’s development blueprint – Project THEMES – was being implemented with the goal to develop efficient and sustainable transportation model that would improve mobility, promote economic growth and enhance the living conditions of the residents.

He said: “Today’s flag-off of the construction of infrastructure for the standard gauge Red Line is another promise kept and it demonstrates, in practical terms, our commitment to achieve the objectives of traffic management and transportation pillar in our development agenda. This is because we recognise the role which an efficient transportation system plays in enhancing people’s quality of life and as a major driver of socio-economic development.

“The State’s Strategic Transport Master Plan, which encompasses a number of projects that are germane to achieving our vision for a Greater Lagos, is founded on imperatives that seek to increase transport choices for all users and make the transit system integrated, attractive, convenient, affordable and accessible.

“Since efficient transportation is the backbone of any economy, we are happy to be committing this investment in our transport infrastructure, so that our people can meet their daily targets and aspirations. 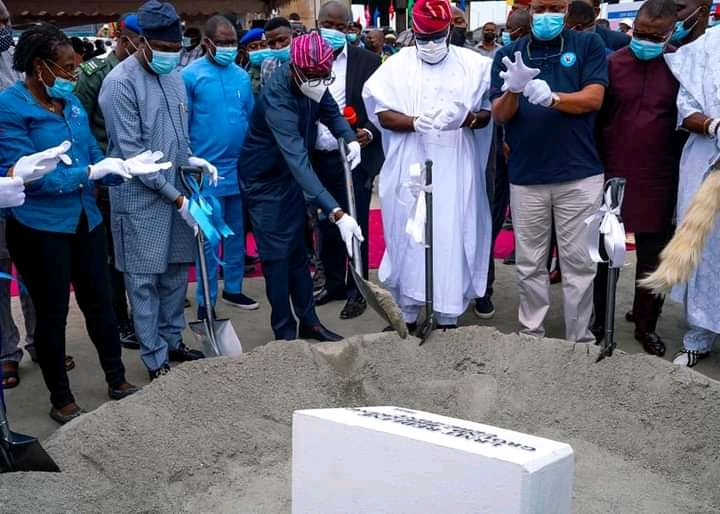 This all-important transport project we are all gathered to witness today represents a major step in this direction.”

Sanwo-Olu disclosed that the implementation of the Red Line project was being supported under the Differentiated Cash Reserve Requirement (DCRR) programme – a financing package put in place by the State Government through the Central Bank Nigeria (CBN). The Governor expressed gratitude to President Muhammadu Buhari and the CBN Governor, Dr. Godwin Emefiele, for supporting the State in the bid to make the project a reality.

To facilitate smooth operations of the Red Line, Sanwo-Olu said the State Government would be constructing ancillary infrastructure, including 6 overpasses at strategic level crossing points along the rail corridor to eliminate interactions between the rail systems, vehicular and pedestrian traffic.

The overpasses will provide grade separated crossings that will enhance safety for the rail system and road users.

Sanwo-Olu said: “The unique characteristics of the Red Line is its integration with the Ikeja Bus Terminal, Oshodi–Abule Egba Bus Rapid Transit (BRT) lane, the future Orange Line, which goes from Ikeja to Agbowa, and the General Aviation Terminal One of the Murtala Muhammed International Airport through a skywalk.

“Another unique feature of the Red Line is that all the stations have elevated concourses with either at grade island or side platforms for easy boarding and alighting of passengers. The Red Line also integrates with our Bus Terminals at Oyingbo, Yaba, Oshodi, Ikeja and Iju, giving modal options to our people in their daily commute, either for business or leisure.”

The Governor presented cheques of varying amounts as compensation to 25 residents whose properties, businesses and accommodation were affected. Over 263 properties are affected. Beneficiaries were those verified to be bona fide property owners, business owners and tenants of buildings cleared along the right-of-way.

Commissioner for Transportation, Dr. Frederic Oladehinde, said the Red Line project was a continuation of the implementation of the State’s Strategic Transport Master Plan, which made provision for six standard rail lines, one monorail, 14 BRT corridors and over 20 waterway routes.

He said the intervention was a deliberate effort of the State Government and its development partners to make Lagos livable beyond Year 2032. 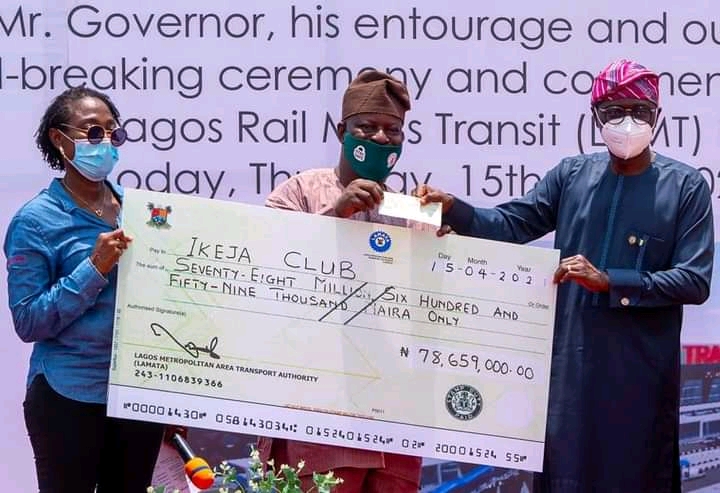 Managing Director of LAMATA, Mrs. Abimbola Akinajo, said the project was a bold step and commitment of the Governor to solving transport challenges in line with his administration’s development blueprint.

She noted that the construction would not be delayed by funding and human factors, as stakeholders were duly carried along in the project.

The Red Line standard gauge will reduce travel time from Agbado to Oyingbo by over two hours.