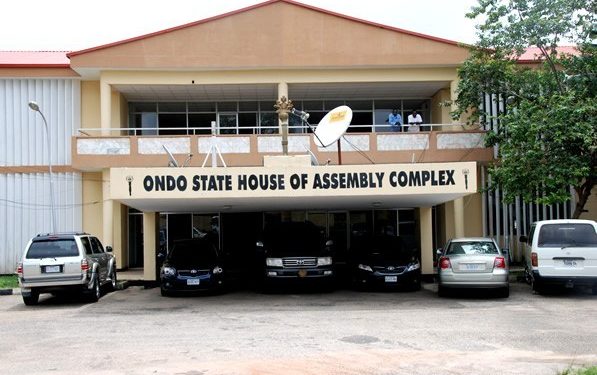 use of Assembly was in confusion on Thursday following the sudden appearance of a snake in the Assembly floor.

Sources said the reptile fell off the roof of the hollow chamber while the lawmakers were about to start legislative business.

The lawmakers, it was learnt quickly abandoned their desks and microphones and fled to different directions for safety.

According to the source, “The speaker, Bamidele Oloyeloogun and other lawmakers had begun sitting when the ceiling directly on top of his seat caved in and almost fell on the speaker’s head.”

“The weak ceiling also fell on the seat of the parliamentary workers of the Assembly who sat in front of the speaker,”

The session was said to have ended abruptly until proper repairs were carried out on the Assembly complex.

The Chairman,House Committee on Information, Gbenga Omole deplored the dilapidated condition of the Assembly complex, which he said paved way for reptiles and termites inside the chamber.

He said, “on Wednesday when we are about to enter into plenary, a big snake just ran out of the chamber which disrupted our sitting and we had to hurriedly leave the chamber.

“We are about to sit again today when a ceiling caved in directly where Mr. Speaker was sitting, we were agitated and when we looked around we saw the damage the termite had done to most of the wood work in the chamber.

“At that point we had to call ourselves and adjourned the sitting.That chamber is no longer good for legislative business and because of that we decided to adjourn indefinitely. The House will be going on an indefinite recess”

Omole said they would meet the governor on the development saying” Mr Governor is aware of part of the infrastructural decay here because many things here are outdated and not too good for legislative business.