There will be chaos if Atiku visits Ogun State —Kashamu 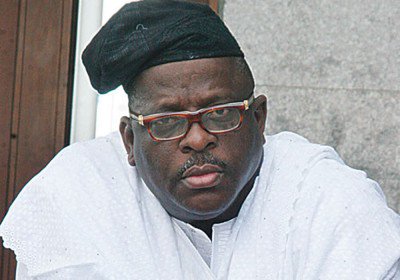 The governorship candidate of the Peoples Democratic Party in Ogun State, Buruji Kashamu, has said the presidential candidate of the party, Atiku Abubakar, cancelled his visit to the state to avoid causing chaos.

Kashamu, who spoke to our correspondent on Thursday, also said despite the controversy that surrounded his emergence as the candidate of the party, he would win the election.

The national secretariat of the PDP had picked Kashamu’s rival, Ladi Adebutu, as the governorship candidate of the party in Ogun.

After a prolonged legal battle, the Supreme Court on Monday ruled in favour of the Adebayo Dayo-led state executive of the PDP in Ogun state.

Kashamu emerged the governorship candidate through the faction.

Atiku was to visit Ogun State as part of his nationwide campaign; but the plan was cancelled.

Kashamu said, “He (Atiku) decided not to visit Ogun State because he wanted to avoid having any problem. You know the other guy, Ladi Adebutu, is still parading himself as the governorship candidate. We all believe his (Atiku’s) coming can cause chaos. We had written to the police and the DSS to intervene so that there would be no problems. Atiku is a man of rule of law and the national executive has not been following the rule of law, that is why he declined coming to Ogun State.”

Kashamu, while expressing confidence in the ability of the Independent National Electoral Commission, said he believed the elections would be free and fair.

Meanwhile the Deputy Chairman of the Atiku Presidential Campaign Organisation (South), Otunba Gbenga Daniel, on Thursday said the failure of the party’s presidential candidate, Atiku Abubakar, to have a major campaign in Ogun State was strategic.

Daniel said this during a campaign tour of Ogun Central and East Senatorial districts.

He said, “He (Atiku) has been to Ogun State a number of times. It is a thing of strategy. I think we have done what we are supposed to do;  everything is rooting for Atiku and that is the most important.”

The former governor, however, expressed fear over the call by the Attoney -General of the Federation, Abubakar Malami, for the postponement of the elections.

He said, “That is quite suspicious, and I hope that this is not part of the grand plan to derail democracy.”